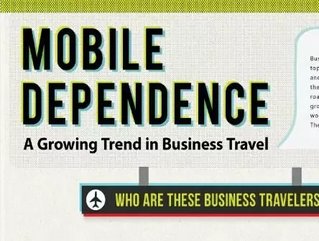 Do you check your smartphone while sitting on the toilet? You can go ahead and admit it; you’re not the only one. According to statistics reported by PC Housing, 75 percent of business travelers save time by scrolling through their iPhones and BlackBerrys in the bathroom. (Android users are the actually the most likely offenders).

PC Housing places business travelers in temporary corporate houses and apartments across the country, so it’s familiar with the demographic.  Using data compiled from a variety of travel and tech sources, PC Housing put together an interesting infographic on the growth of mobile dependence within the business travel community.

It’s not at all surprising that technology plays a major part in the daily activities of the modern frequent business traveler. But some of the details surrounding the time we spend connected to our tech devices are remarkable.

For instance, PC Housing’s data shows that 20 percent of smartphone users log on to Facebook before they even get out of bed in the morning while the average business traveler checks their smartphone 34 times a day.

And while we’re sure that those of you who travel often for work know that it can make you feel frequently burned out, but did you know that statistics show that business travelers work over 240 more hours per year than the average American worker?

Some of the data actually suggests that our gadgets might actually be ruining our quality of life. 56 percent of mobile workers say that they exercise erratically or not at all due to technology.

One major lesson to be taken away from PC Housing’s data: the ability to multi-task is not always a blessing.

Although a whopping 98 percent of respondents said that technology allows them to multi-task and 65 percent said that multiple devices allow them to be more productive, they admitted that the activity resulted in lower levels of concentration and prolonged task completion.