Natural defense – how the US military is embracing solar power 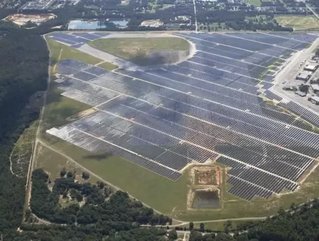 The biggest solar panel installation in Florida went live this summer, an initiative that will drastically cut CO2 emissions by powering tens of thousands of homes with natural energy.

Coronal Energy, part of the Panasonic Group, is a North American provider of renewable energy solutions. Traditionally, its customers have been utility companies like Southern California Edison and Duke Energy, but in recent years, in keeping with the growth of the renewable energy industry, it has seen an increasing amount of sales to electricity power plants like its own.

In August this year, the organization completed its largest project to date, the “jewel in the crown” as Chief Commercial Officer Danny Van Clief calls it. This is the Gulf Coast Solar Center Portfolio, a massive construction of almost 1.5mn solar photovoltaic panels that will deliver enough energy to power 18,000 homes in northwest Florida.

The solar panels are located in three separate sites: the Eglin Air Force Base, three miles away from the city of Valparaiso, the Naval Air Station’s auxiliary fields in the town of Holley, and at Saufley's military airport.

Combined, the three sites have a capacity of 120 MWac covering 942 acres of land, making this the biggest solar installation in the state of Florida, as well as the largest on any Department of Defense (DoD) property so far.

The project took three years to finish, from the date Coronal first approached Florida-based electricity provider Gulf Power with the idea in 2014, until its completion this summer.

Constructing a project of this scale is determined by how much real estate there is available. “We looked at the available acreage on all three bases,” Van Clief explains, “and identified the areas that met our specifications, including flat open terrain and close proximity to the electrical infrastructure. We also used airfields and runways that weren't in use anymore and were just sitting idle.”

Coronal worked with all three branches of the Department of Defense: The Navy, Air Force and Army, who Van Clief explains were very receptive to the concept because of their 2025 target to increase usage of renewable sources in their supply chain by 25%. “So, when we engaged with them, they were actually shopping for renewable energy; that’s the easiest way to put it,” he says.

Before going ahead, approval was sought from the Florida Public Service Commission, one of the requirements for a development of this kind. Coronal then provided a forecast of economic benefits to the communities where the developments would be taking place. Here, a key factor was generating jobs across the three counties, and 450 workers were employed, 98% of whom were hired locally.

Plans to create employment opportunities are often requested before permits are granted, however, the process varies from county to county. “In this case that was a very important component of the approval that we were seeking,” Van Clief says.

There is a potential to lease the facilities too, in particular the Eglin lands, which will bring in additional revenue for the DoD to invest in new energy initiatives. Also, Coronal is providing ‘in kind consideration’, meaning it will pay for upgrades to the electric grid across all three sites.

The renewable energy sector is very competitive and expanding fast. Van Clief estimates that there are around 9,000 businesses involved in solar power in the US at the moment. “It is growing at five times the rate of traditional fuels. 2016 was the first year in the history of the US where more solar capacity was brought online than natural gas. The demand is clearly there,” he says.

"One half is people are looking for affordable electricity, and the other half is environmental. We're able to meet both of those demands. The forecast for solar in North America is that if you took every solar panel ever installed from the beginning of the industry going back to the 1970s, and added them all up to today, [it] will double in a five-year period.”

Out of all Coronal's work, the Gulf Coast Solar Center Portfolio is by far its proudest achievement. “It would be hard for us to top that,” Van Clief says, “but I would say we’re really proud of the collective track record of our projects, working with the major utilities. That’s who we are, that’s what we are known for.”

The length of the Solar Center Portfolio contract is 25 years, and Van Clief states it will have lasting impacts. "Firstly, these are going to be viewed as major steps forward by the Air Force and the Navy for their long range 2025 targets. But secondarily, from an environmental perspective, the power that we’re producing won’t get sourced from fossil fuels, [and] will result in the reduction of CO2 emissions equivalent to 3.5mn tons."

That is the equivalent of taking nearly 680,000 cars off the road every single year, thanks to harnessing the natural power of the sun.