A new app is helping the taxi industry compete with Uber 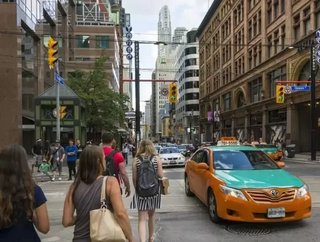 Though they’re often advertised as ridesharing, most consumers understand the true nature of apps like Uber and Lyft as smartphone technology meant to disrupt and evolve the taxi industry. This fact isn’t lost on the established taxi industry—earlier this year frustration taxi drivers in France took to the streets and staged protests against Uber, and last week taxi drivers in Toronto staged their own protests asking for stricter laws to manage UberX drivers while in Calgary Uber has suspended operations to work on stronger regulation.

The Toronto-based tech company previously launched #TAXI, a mobile phone service that connects users to the first available taxi company in the area by dialing #TAXI (#8294). This new service harnesses the versatility of apps to push that concept even further.

“Available for iOS and Android, the app helps users e-hail taxis and compare transit options,” says The Ride’s press page. “The Ride is the most comprehensive transportation app in Canada, with direct real-time connection to over 6,000 cars and 25,000 taxis through its fleet partnerships, serving over 700 Canadian cities and towns.”

Users can “e-hail a cab,” booking close-by licensed and insured cabs and tracking their location along a built-in map similar to other ridesharing apps. Users can also map out public transit options, find nearby Car2Go and ZipCar vehicles, and choose to pay drivers with cash or link the app with a credit card. What’s more, unlike Uber and other services, the taxi companies working with The Ride promise only the stated fare (plus a $2 e-hailing convenience fee or $1 live dispatch connection fee) with no surge pricing.

While the industry has been calling for regulations on ridesharing companies for some time, change and legislation are coming slowly. But by working alongside technology and improving its own offerings, the taxi industry may still be able to beat Uber at its own game.