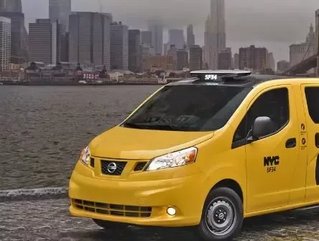 Back in 2007, the City of New York started a quest to find the “Taxi of Tomorrow”—a vehicle that would serve the Big Apple’s 600,000 daily taxi users with a big helping of technology, safety, and cutting-edge design. This week, it was announced that New York has chosen the 2014 Nissan NV200 to stand up to the task.

The NV200 is Nissan’s newest commercial van model. It also happens to be the automaker’s smallest van, but it’s still a roomy and luxurious upgrade from the iconic Ford Crown Victoria.

And speaking of the Crown Vic, there’s no need to worry about seeing it completely phased out any time soon. The NV200 won’t hit the streets until late 2013, but the contract does state that Nissan will be New York’s exclusive cab supplier of 13,000 cabs over the next decade.

“The Nissan NV200 unveiled today will be the safest, most comfortable and most convenient taxi the city has ever had,” said New York Mayor Michael Bloomberg. “New York City cabs have always been iconic, and now they will set a new standard. The 600,000 passengers who use taxis to get around every day deserve the cutting-edge technology and top-of-the-line safety features that this model delivers.”

·         Front- and rear-seat curtain airbags, and seat-mounted airbags for the front row

·         Lights that alert other vehicles that the taxi doors are opening

The Taxi of Tomorrow program includes a pilot study of the use of zero-emission electric taxis. Nissan will provide the City with six Nissan Leafs and three Level 2 charging stations to test out the possibility of electrification.

Additionally, Nissan has partnered with Braun Corp. to come up with and produce a new solution for a wheelchair-accessible taxi for the city that will be offered and available for sale in 2013.