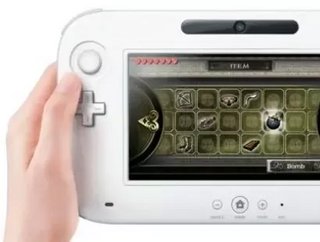 Nintendo wrapped up its press conference today at E3 2011 at the Nokia Theater in Los Angeles and announced that its Wii successor will be called Wii U.

Wii U utilizes a new wireless controller with a 6.2-inch touchscreen display and measures about eight inches across right at your fingertips. It has a left and right analog stick, traditional D-pad for up, down, left and right movement, as well as A, B, X and Y buttons, according to USA Today. Left and right shoulder buttons, as well as left and right triggers, are on the device. A built-in gyroscope and accelerometers will let players affect game play by moving the display, even in a 360-degree direction. The controller also has built-in speakers and a microphone.

"It is a fully functioning controller in terms of all of the buttons and input devices that any type of developer or any type of gamer would want," says Nintendo of America president Reggie Fils-Aime.

The coolest part, though, is that the controller is also a self-contained device that doesn’t need to use a TV as a display to play a game. This can be incredibly useful for multiple household members who want to interrupt video game playing to watch programs on the TV. The console also features 1080 progressive HD video using the same size Wii game discs. Nintendo’s event also showed the controller display being used as a web browser and video chat access – how cool is that?

Nintendo plans to launch the system sometime after April 1, 2012; no price points have been released.