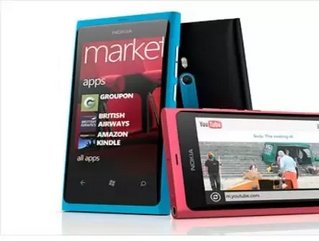 Nokia has had some trouble keeping up with its smartphone market competition lately, but its unveiling of a new line of Windows devices may turn the tide.

“Lumia is light,” Elop told the crowd at Nokia World, the company’s developer’s conference in London. “We believe Lumia is the first real Windows phone.”

The Lumia 800 and 710 will set users back $580 and $375, respectively and both feature 3.7-inch AMOLED touchscreens and 1.4GHz processers. The 800 has a metal frame that blends seamlessly with a curved glass face and comes with an 8-megapixel camera.

There’s no word yet as to when the Lumia will be available in the US. Nokia will roll out the phones this November in select European countries, including France, Germany, Spain, Britain and Italy. By the year’s end, Lumia will be sold in Hong Kong, Russia, India, Taiwan and Singapore.

During the Nokia World conference, the Finnish brand also took the opportunity to unveil four reasonably priced smartphones, ranging from about $84 to $160. The Asha handsets, named after the Hindi word for “hope,” are equipped with cameras, navigation applications, fast download capability, QWERTY keyboards and SIM cards and will be available in early 2012.

It’s tough to say what role these developments will play in Nokia’s quest to gain footing in the market. The iPhone pretty much defines the smartphone standard and remains a stealthy competitor. Nokia has lost more than $87 billion dollars in market value since 2007, when Apple released the iPhone.