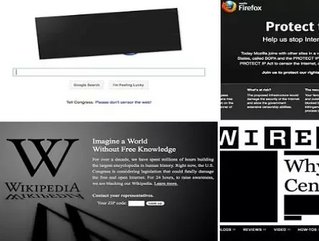 Since you’re on the Internet right now, you’ve undoubtedly at least heard of the SOPA (Stop Online Piracy Act) and PIPA (Protect IP Act) bills. SOPA and PIPA aim to curb online piracy of copyrighted material but have been widely criticized for their potential to negatively impact the Internet and American business through censorship.

On Wednesday, January 18, major websites, including Google, Reddit and Wikipedia decided to completely blackout or modify their homepages in protest of SOPA and PIPA, and it appears that members of the U.S. Congress have taken notice and been moved to abandon the bills.

Florida Senator and PIPA co-sponsor Marco Rubio was the first to announce on Wednesday that he wanted to pull his name from the bill.

In a Facebook post titled “A Better Way to Fight the Online Theft of American Ideas and Jobs,” Rubio wrote:

“As a senator from Florida, a state with a large presence of artists, creators and businesses connected to the creation of intellectual property, I have a strong interest in stopping online piracy that costs Florida jobs.

However, we must do this while simultaneously promoting an open, dynamic Internet environment that is ripe for innovation and promotes new technologies.”

Rubio was followed by Texas Senator John Cornyn, head of the campaign operation for the Republican party. Cornyn took to his Facebook page to say that it’s “better to get this done right rather than fast and wrong. Stealing content is theft, plain and simple, but concerns about unintended damage to the internet and innovation in the tech sector require a more thoughtful balance, which will take more time.”

According to the Omaha World-Herald, a spokesperson for Nebraska Rep. Lee Terry said that he is also planning to withdraw his support.

Both bills have gathered support from various bipartisan committees and media companies, but the Obama Administration has spoken out against SOPA and several Internet companies, venture capitalists and entrepreneurs have written to the U.S. Congress to express concern about SOPA and PIPA’s threat to innovation, creativity and American job creation.

For more information about PIPA and SOPA, take a look at the following links:

UPDATE: As there seems to be some confusion about what the facts of this story mean for the future of SOPA and PIPA, we would like to clarify that as of the time of this update, 37 U.S. Senators support PIPA, 21 oppose it and six say they are leaning toward voting no. 27 U.S. House members support SOPA, 87 are in opposition and 34 are leaning toward no.

Both bills are still pending and the Senate is still scheduled to vote on PIPA on January 24.

SOPA's lead backer and House Judiciary Committee chairman Lamar Smith (R-Texas), said that he will not back down from opponents.

"It's easy to engage in fear-mongering and it's easy to raise straw men and red herrings, but if they read the bill they will be reassured," Smith told the Wall Street Journal.

SOPA and PIPA backers, including the Motion Picture Association of America (MPAA), referred to yesterday's Internet blackouts and tech business protests as "dangerous" gimmicks designed to "punish their users or turn them into their corporate pawns" as well as "punish elected and administration officials who are working diligently to protect American jobs from foreign criminals."

For detailed information and updates about where members of Congress stand on SOPA and PIPA, visit http://projects.propublica.org/sopa/