Snoop Dogg at E3 for Yoostar on MTV unveil 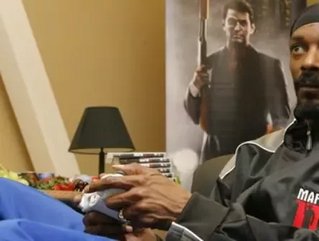 Snoop Dogg made a special guest appearance this Wednesday morning at E3 to announce the newest social video game on the block, Yoostar on MTV. The game acts as a social “video karaoke” and works with Xbox 360 Kinect ($49.99), released in Holiday 2011, and is designed for the pop culture gamer fan. The game gives the opportunity for fans to warp into their favorite MTV character, from shows like Jersey Shore and The Hills, and place themselves into the TV show.

The game features 80 clips from TV, music videos, interviews, movies and more in a virtual green set to fulfill their wildest, actor-bound dreams. Yoostar will also boast its own social community, Yoostar Playground, to rate and award fellow Yoostars’ uploaded clips, while earning boosts, fame and Yoobucks. Users can also rise the leaderboard by adding comments and entering contests.

With a huge library of live events, news, classic, reality, and original shows to choose from, as well as the inclusion of upcoming shows to maximize its cultural relevancy, the extensive archive of trend-setting and entertaining content leaves no stone unturned, according to a statement released by the company.  Additionally, some of the best music videos of the last several decades will be playable in Yoostar on MTV.

"With Yoostar’s newly upgraded Virtual Green Screen technology VGS 2.0,players will be able to seamlessly insert themselves into the best of MTV programming from its enormous catalog.  Perform the lines as written, or improvise and deliver an original performance.  After you’ve finished, showoff to your friends by uploading your performances to Yoostar Playground, Facebook, or Twitter."

We absolutely cannot wait for this game to come to market.