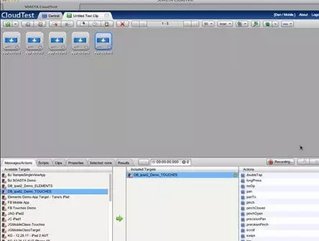 SOASTA announced today the release of its newest mobile developer tool, TouchTest. Providing a testing tool that recreates all user actions and gestures when utilizing a smartphone, mobile app developers will now be able to release their applications knowing its true abilities.

Consumers today are using mobile apps more than ever, on average 94 minutes daily. What’s concerning is that about 75 per cent of all web and mobile apps are launched without being fully tested, leading to frustration and misunderstandings for users. SOASTA’s new CloudTest Platform will deliver “complete functional test automation for continuous multi-touch, gesture-based mobile applications.”

What's more, SOASTA’s TouchTest is able to capture and apply users’ gestures such as pan, pinch, zoom and scroll. This ability is available on iPhones, iPads, iPods and Android mobile devices.

“We are extremely proud to introduce to the mobile app market the same level of revolutionary test innovation that we delivered to cloud testing in 2008,” said Tom Lounibos, SOASTA CEO. “The way that users interact with data and apps is rapidly changing. Multi-touch, gesture-based applications are adding voice interfaces, and ‘big data’ applications such as logistics, distribution, and media will soon have 3D navigation and hovering browser UIs.  The ‘Minority Report’ user interface has arrived, and with it we must have a new test platform to validate the highest quality user experience. TouchTest and our new CloudTest Private Device Cloud will change the game for mobile developers and testers forever.”

“SOASTA’s new CloudTest release with TouchTest technology is truly revolutionary.  There are no other solutions that address the market need for fast, precision mobile app testing,” said Mark Calomeni, Director, Software Platform Engineering, HighWire Press, Stanford University.   “Functional testing of mobile apps has been difficult at best, forcing us to resort to manual testing in many cases, rather than use today’s solutions.  This new offering will indeed help the industry deliver higher quality mobile apps to the market faster.”