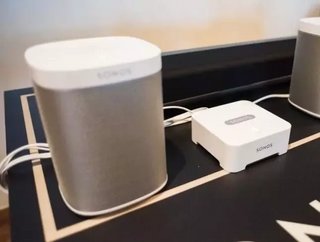 Established back in 2002 in California, Sonos has focused on monopolising the music streaming market with various audio and speaker systems which connect wirelessly, allowing the user to stream their music from various locations in the home, either the same song or several different choices, appealing to individuals and families alike.

The company designed and launched its original products into the home audio market in the mid-2000s to critical acclaim, with the rise of mobile apps securing their appeal.

This year, the company is set to open its first store within New York City, which is set to increase the company’s market base and revenue further. Currently, Sonos products are only sold within large retail outlets.

The smallest speaker in the Sonos collection, the Play:1 has been constructed to appeal for smaller rooms, yet what it lacks in size it makes up in its ability to surround a small space with crisp, clear, high quality sound.

All the speakers support a variety of audio formats, from MP3, iTunes and WMA.

Less dominating then the Play:5, the Play:3 successfully blends into the background of any room and can be placed horizontally or vertically on any surface without taking up too much space.

It has the same functions as the Play:1, but incorporates a deeper sound and increased bass – ideal for music lovers who enjoy a wide variety of music. Users can also choose music from an array of stations and genres.

The largest and heaviest speaker, apart from the Sonos Soundbar, the Play:5 dominates any potential space, immersing a room in deep, rich, high quality sound with the use of three mid woofers and six Class-D digital amplifier.

At 14lbs, it is heavy, but has been built with rubber feet on the bottom, allowing the speaker to be moved with minimal damage.