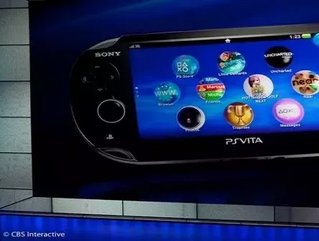 Sony held the North American debut of its new PSP handheld the PlayStation Vita at the E3 conference yesterday. The portable device comes with two joysticks, a 5-inch multitouch screen, front and rear touchpads and front and rear cameras.

"Vita means life," said Kazuo Hirai, president and group chief executive officer of Sony Computer Entertainment to CNET. "And we're confident that Vita will be the first product that blurs the lines between reality and interactive entertainment."

In addition to many exciting games to be launched with this device, such as Uncharted: Golden Abyss, the device will also offer social networking opportunities under the name “Near” to let gamers play against friends with Vitas who are nearby.

The 3G version will come with a partnership from AT&T in the US. There is no news on who will provide 3G service for Canadian consumers.

The PlayStation Vita was first unveiled in January in Japan where they disclosed tech specs such as ARM Cortex A9 CPU and Siaxisis motion sensing system.

The tech world is heating up this week with the start of E3 where many companies unveil their plans for the video game industry for the next year.