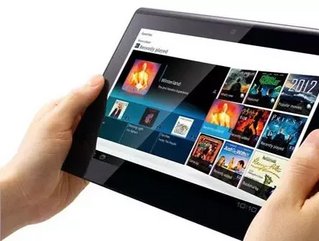 Entering an already competitive tablet market place, Sony released its latest elite technology to Canada in late September, the Sony Tablet S. Offering Canadians a slim Android tablet, the Sony Tablet S has the specs, productivity tools and mobility to conduct important business while away from the office.

The Sony Tablet S is a much slimmer tablet than some of its competitors, such as the iPad. With dimensions of 9.5 inches in length, 6.8 inches in width and 0.3 inches in depth, the Sony Tablet S can easily fit in any briefcase, book bag or even a large purse. The tablet is designed in a wedge-like style for easy viewing, something that’s different from other tablet competitors. Available in either 16GB or 32GB, the tablet has ample amount of storage for your everyday needs. The Sony Tablet S has a 9.4 inch crystal clear display with TruBlack technology featuring a 1280 x 800 resolution. Backed by the NVIDIA Tegra2, the Sony Tablet S is fast and optimizes the Android Honeycomb operating system. Additional perks that come with the Sony Tablet S include Bluetooth capability, a Li-Ion battery that has up to eight hours of battery life and a camera located on both the front and back—0.3 megapixels and 5.0 megapixels respectively.

The availability of apps on the Android Market brings a load of opportunity to the Sony Tablet S. This paired with the automatic connection to your Google profile and its online services really make staying connected easy.

The Sony Tablet S is perfect for making and taking presentations on-the-go. Whether you use the tablet itself or utilize its network connectivity to display your presentation on a supported Sony TV, the Sony Tablet S and its TruBlack display will help you get your point across.

On a non-productivity note, the Sony Tablet S is the first tablet equipped with Sony PlayStation capabilities. Already preloaded with Crash Bandicoot and Pinball Heroes, those that are gaming enthused will be able to pass the time when stuck on a long flight.

Why You Should Buy?

First and foremost, the only issue I found that hindered the Sony Tablet S was specifically associated with the camera: its lower quality photos and lack of flash. In the end, the camera is not much of a problem, when using the tablet as a business tool.

The biggest benefit I saw was that, as the Sony Tablet S is an Android device, Droid users will find the interface incredibly familiar. Overall, the interface is clean, simple and something that is easy to learn for any user. The slender frame of this tablet makes for easy transportation and the included portable case allows you to grab the tablet and go. The wi-fi and Google connectivity provides ease of use, alerting the user of new emails and providing easy access to Google’s calendar, online documents and more. In the end, when considering the multitude of tablets on the market, the Sony Tablet S is one of the best and I would definitely recommend purchasing this tablet.