SOPA and PIPA Battle Rages on. What Now? 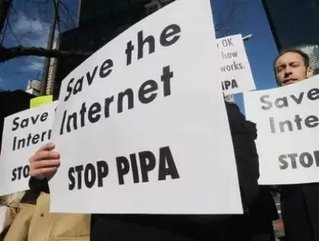 For the most part, everything on the Internet has resumed its normal course after Wednesday’s much-discussed online protest of SOPA and PIPA. The Google homepage logo is now fully visible, Reddit is back up and kicking and even Wikipedia has returned, with a thank you message that reads, in part:

“You said no. You shut down Congress’s switchboards. You melted their servers. From all around the world your messages dominated social media and the news. Millions of people have spoken in defense of a free and open Internet.”

According to nonprofit anti-SOPA/PIPA organization Fight for the Future, Wednesday’s strike resulted in:

-Over 2,000,000 emails sent to Congress (through Electronic Frontier Foundation, Fight for the Future and Demand Progress alone)

While it’s clear that many people took to their keyboards to speak up against SOPA and PIPA, what’s next for the bills is a little more unclear, particularly because both bills are still in play.

Rep. Lamar Smith has vowed that the fight to pass SOPA is not over and that will continue markup in February. PIPA, which has not been publically dropped as dramatically as SOPA, heads to the Senate for a vote on January 24.

So although PIPA/SOPA opponents have reason to celebrate Wednesday’s progress, the battle is still raging.

Some have offered support for legislation introduced by Rep. Darrell Issa (R-Vista) and Sen. Ron Wyden (D-Ore.), who themselves oppose PIPA and SOPA and crafted the Online Protection & Enforcement of Digital Trade Act, also known as the OPEN Act.

OPEN aims to cut off money to foreign piracy sites through the U.S. International Trade Commission, but PIPA and SOPA supporters say that this approach would not be as effective.

Fight for the Future urges people to continue fighting PIPA and SOPA by “calling your Senator every day next week” and visiting Senators’ district offices. The organization writes:

“What seemed like miles away a few weeks ago is now within reach.”

Understanding PIPA/SOPA and why you should be concerned: