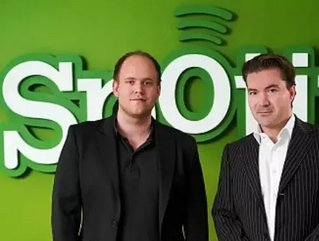 Spotify held its first-ever US press conference in New York City Wednesday morning and announced that it is rolling out a brand-new version of its platform and integrating a variety of free apps.

The Stockholm-based company has taken the music sector of the web by storm since it launched in the US in July 2011 by giving music fans access to over 15 million songs from independent and major record labels. Now it is hoping to make its mark even more prominent by opening up its app platform to developers and improving its functionality.

“The web, for us, was silent before this,” said Spotify CEO Daniel Ek during the press event. “We’re doing this because we believe we have a ton of users who want to find more information around music.”

HTC Unveils Rezound – The 1st US Phone with Beats Audio

Users yearning for an enhanced musical experience will love Spotify’s Rolling Stone app, which gives access to the publication’s content and reviews as soon as it’s published online.

“The Rolling Stone app brings an editorial voice to Spotify, which is something our users have always asked us for,” Ek said.

Other apps highlighted include:

In addition to the inclusion of apps and an app finder, the new version of Spotify has a live feed function that lets users see what friends are doing on the service, including when they add tracks to playlists or begin playing a new song.

Ek acknowledged that Spotify is still in the early phases of innovation but said that more changes, including the integration of mobile technology, could be on the horizon if the current changes prove successful.

“We look forward to being surprised by our developers,” Ek said. “We believe they will bring amazing new apps to the Spotify platform; the possibilities are truly endless.”