SXSW Insights: The Future of Innovation 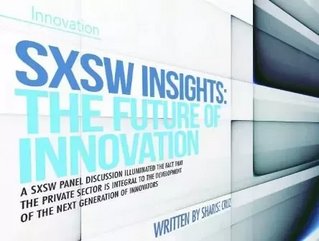 During SXSW Interactive, we attended a panel called “Building the Next Generation of Innovators,” which illuminated ways that public institutions, non-profit organizations and private businesses can work together to get children actively involved in science, technology, engineering and math (STEM) in order to propel business and innovation in the future.

Garg started the conversation by pointing out that the White House has been putting a lot of energy into finding ways to build the economy by inspiring kids to learn about science and technology.

“More and more, science and technology are becoming part of being a citizen,” said Garg. “But [further development] is going to require companies to step up.”

That’s where the private sector comes in. Topol says that for its part, Time Warner Cable has tackled the issue of student engagement with philanthropy and community outreach, with a particular focus on non-profit partnerships. In April 2010, Time Warner Cable entered into a strategic partnership with FIRST after Time Warner Cable’s CEO Glenn Britt was asked by President Obama to mobilize the CEO community to build math and science appreciation among kids.

Through its Connect a Million Minds program, Time Warner Cable has dedicated $100 million to work to “inspire the next generation of problem solvers.”

Time Warner Cable has further branched out in the STEM community by working closely with the Coalition for Science After School and joining FIRST’s i.am FIRST initiative to launch Wouldn’t It Be Cool If—a contest that lets students pitch invention ideas to a panel of experts.

Each year, FIRST conducts an international high school robotics competition, giving teams of students six weeks to construct a robot that can operate both autonomously and through wireless controls.

Since its inception FIRST has attracted a notable list of sponsors, including Microsoft, Google and Boeing, and gained media attention with a variety of televised documentaries focused on the program. Last year, ABC aired “i.am FIRST: Science is Rock and Roll”—a special featuring Bono, Britney Spears, Justin Bieber and The Black Eyed Peas.

Such pop culture/STEM fusions just may be the key to getting kids excited about the inevitable direction of business and innovation. According to Garg, 80 percent of jobs in the next decade will use math and science.

“We have to make certain that kids know how to innovate in the same ways we have to learn and develop ourselves in our jobs,” said Dudas, adding that challenges are vital to the process. “Failure is just another opportunity to learn.”

We all still have a lot of work to do—Topol points out that recent studies show 61 percent of middle school kids would rather take out the trash than do their math and science homework—but it seems that FIRST and Time Warner Cable are making significant strides toward getting the next generation engaged.

Before closing out the panel by wowing the crowd with her FIRST Robotics Competition team’s six-foot tall robot, Allison Rich explained that when she was younger, she dreamed of being a dancer, but has shifted to pursuing a career in mechanical engineering.

“That’s something I never would have thought about if it wasn’t for FIRST,” Allison said. “It’s math and science, but you don’t know you are doing it.”