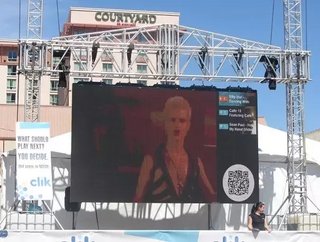 Catching people’s eyes at SXSW this year is Canadian-based Smart TV platform Clik. Showing off their technology on a large screen right outside of Austin Convention Center, Clik is debuting to those interactive savvy attendees their Smart TV platform that makes sharing content easy.

Make any TV with a browser into your own screen. Accessing Clik’s TV platform is easy and users with the Clik app just have to point their phone toward a provided QR code on the screen and the app makes the screen theirs to command. Clik has many ideas for the future of the app and the platforms capabilities. Currently, though, the app features Youtube and allows users to get away from their smartphone screen and move it to any accessible screen.

What inspired Clik CEO Ted Livingston to create this technology? Although the app just recently debuted, the platform is a direct result of an idea that came about more than three years ago. Back then, Livingston explained, all Internet content and its consumption revolved around the computer desk. Livingston knew, even back then, that a change was needed and coming, that media consumption would soon become mobile and users would have a need for technology that gets them away from the desk.

Livingston and his team are doing just that. With an extreme example outside SXSW where attendees are choosing their favourite YouTube videos to play right there on the street, Clik is making waves and Livingston promises there’s more mind-blowing technology to come.

So go try it out! Clik is available through the iTunes store and the Android Market.