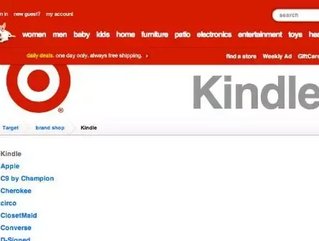 It looked like things were going well for a while. Target started selling Amazon’s Kindle tablets and products two years ago, boasting that it was the first brick and mortar retailer to do so. Plus, during last year’s Black Friday hustle, the newly-launched Kindle Fire was Target’s bestselling tablet.

But just months later, the second largest retailer in the US has announced that it will stop selling Amazon’s Kindle devices within a few weeks.

“Target is phasing out Kindles and Amazon- and Kindle- branded products in the spring of 2012,” said Target Spokeswoman Molly Snyder in an e-mail statement. “We will continue to offer our guests a full assortment of e-readers and supporting accessories, including the [Barnes & Noble] Nook.”

Target didn’t provide many details about the decision, or even give Amazon so much as a public “it’s not you, it’s me” explanation. So, for now, we’re not sure of the company’s motives or the specific date when Kindles will disappear from Target shelves completely.

According to Reuters, Target’s announcement coincides with a move to outfit some of its stores with “special displays of Apple Inc products, including the iPad.”

Apple and Amazon have declined to comment on the subject.

The Kindle has already been wiped clean from Target.com and some store representatives have said that they will not be receiving new stock of the product. There are still a variety of Kindle screen protectors and jackets (manufactured by other companies, including M-Edge and Speck Products) available on Target's website.