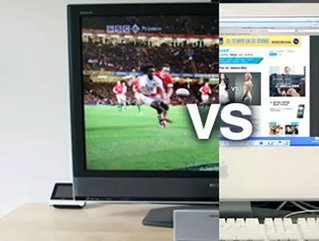 If made to choose between TV and social media, 58 per cent worldwide would prefer their television sets instead of sharing their daily activities online to their social network.

When breaking it down by region, North America was even more in favor of their TVs, with 73 per cent ready to swear off social media. Europe’s answers were similar, with 66 per cent choosing TV over social media. The Middle East and Africa is a more online-thinking region, with survey results showing 54 per cent would rather give up their TV instead of abandoning Twitter and Facebook.  BRIC countries (Brazil, Russia, India and China) came in on the social media preference side with 58 per cent in favor of keeping their social media networks alive. Finally, the G-8 countries came in at high 69 per cent embracing their television entertainment.

What isn't surprising is that those surveyed who were under 35 years old coming in dead even—50 per cent preferring social media and 50 per cent in love with their TV. This could be a result of growing up with social media and could also be a sign of things to come—a potential decline of TV to the Internet.

Check out the infographic below to see survey results: