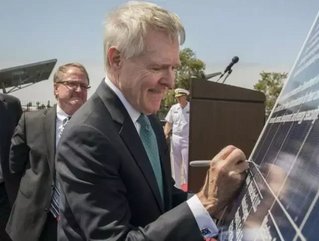 The United States government has been taking a long and serious look at the realities of energy procurement lately. With renewable energy sources decreasing in price while increasing in availability, options like solar power and wind power are becoming a more appealing and available option. What’s more—with the recent release of the Obama Administration’s Clean Power Plan, calling for a significant increase in energy usage by 2030, government agencies and departments are looking for innovative ways to increase their access to renewable sources.

Now the U.S. Navy is ahead of the pack. The department recently signed an agreement with Western Area Power Administration and Sempra U.S. Gas & Power to commence work on a new expansion to Sempra’s Mesquite solar farm. To date, this investment on behalf of the U.S. Navy has been confirmed as the largest purchase of renewable energy ever made by a U.S. federal entity.

RELATED CONTENT: US wind energy prices are at an all-time low

What does that investment entail? According to a press release from the U.S. Navy, the Mesquite Solar 3 solar power project is an expansion to Sempra’s Arizona-based Mesquite solar farm. This latest expansion will add a 210-megawatt direct current solar facility at the Sempra Mesquite solar site, which will contribute direct power to the following 14 Navy and Marine installations:

Beyond just supplementing and diversifying its power sources, the U.S. Navy points out that this project will help the department with long-term cost stability. The project will also provide 21 percent of the power needed to reach the department’s goal of procuring one gigawatt of renewable energy by 2015—one goal on the path to the Department of Defense mandate to procure 25 percent of energy from renewable source by 2025.

"The collaboration on Mesquite Solar 3 is a triumph of innovative problem solving, and will help to increase the DON's energy security by diversifying our power portfolio and improving energy efficiency," said Secretary of the Navy Ray Mabus in a statement released after the ceremony commemorating this partnership. "This agreement is also projected to save the DON at least $90 million over the life of the project."