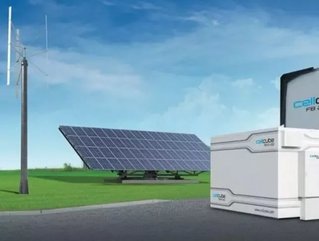 CellCube vanadium redox flow batteries are a new type of battery that runs on vanadium, rather than lithium.  Vanadium is a unique battery material because unlike the material in lithium batteries, it can be used on both positive and negative sides of a battery, thus preventing the battery electrodes from degrading.

The CellCube is manufactured by Gildemeister, the German firm American Vanadium works with in marketing and selling the mega batteries, and is one of kind because unlike other energy storage solutions, the CellCube guarantees uninterrupted power supply.  It is independent of weather fluctuations and can run with or without wind and sun and it has been acknowledged for its renewable energy output and is considered a milestone in the history of regenerative energy.

American Vanadium is an energy storage company that owns the only known vanadium mine in the United States, which is critical for providing vanadium electrolyte for the CellCube systems.  Despite the name and the location of its primary mine, American Vandium is a Canadian company, operating out of Vancouver.  The company utilizes the German firm, Gildemeister, to manufacture the CellCube energy storage system.

Because the CellCube runs on vanadium, it can provide multiple hours of energy for long duration requirements with ease, which makes this energy storage system one that many companies and cities will be excited to obtain

The company has recently partnered with New York State Energy Research and Development Authority to demonstrate the energy management abilities of the CellCube.   In a press release about the project, the Americna Vanadium Board states, “The project will demonstrate how vanadium flow battery technology, capable of multi-hour and multi-megawatt energy storage, can enable NYC commercial buildings to be “smarter” about how and when they use energy, and provide resiliency in times of need.”

The results of the project will reveal how efficient the CellCube is and will no doubt have utility companies interested in learning more about this new type of energy storage potential.