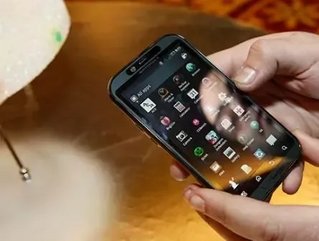 Verizon Wireless and Motorola Mobility, Inc. announced Wednesday its new Droid Bionic by Motorola smartphone, which will be available tomorrow. The Bionic is the first Verizon smartphone – and the thinnest – to combine 4G LTE with the power of dual-core 1 GHz processors, 1 GB of RAM and a 4.3 inch qHD display. Download speeds are also impressive with 5 to 12 Mbps and upload speeds of 2 to 5 Mbps in 4G LTE mobile broadband coverage areas.

One of the more standout features with the new Droid Bionic is ZumoCast, an app that lets users bring their digital videos, music, pictures and documents from their computer to their phone via remote access. Also new to the Droid fleet of phones is the Webtop app, which lets the phone act as a projector of sorts. The smartphone can beam the web browser, email or documents to a TV or monitor.

Accessories such as the HD Station allow users to turn the phone into an entertainment center so they can view pictures, video, and content on any HDTV or monitor by connecting a separately sold HDMI cable. Users can also take a conference call while editing documents and surfing the Web. Finally, the Android Gingerbread-powered Bionic lets customers share their 4G LTE signal with up to five Wi-Fi-enabled devices when they activate the Verizon Wireless Mobile Hotspot.