Verizon Takes another Swing at Employees on Strike 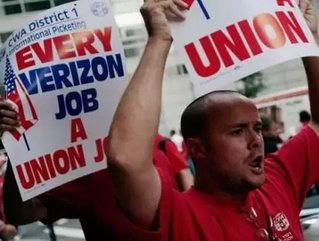 Verizon spokesman Richard Young said that the company will no longer provide benefits for striking workers.

“Verizon is spending many millions of dollars a day providing health care for workers who willingly decided to strike,” Young said. “If they’re not employed and not working for the company, we’re not going to fund their pensions.”

According to one of the unions representing Verizon’s striking employees, this is the worst threat Verizon has made since negotiations began.

The majority of the 45,000 Verizon employees on strike work for the company’s landline telephone segment, which has been declining significantly in the past five years. Verizon’s base of landline customers has dropped from 45 million to 25 million.

Reinventing Your Business with Social Media and Blogging

“The existing contract provisions, negotiated initially when Verizon was under far less competitive pressure, are not in line with the economic realities of business today,” Verizon’s Chief Executive Lowell McAdam told employees in a letter. “We’re asking our union-represented employees to help us on a variety of issues that could streamline our processes and further reduce our wireline cost structure while keeping their overall compensation and benefits among the best in corporate America.”

In the wake of its landline decline, Verizon wants union employees to take fewer sick days, accept a freeze on pension benefits and make larger contributions to their healthcare plans. Employees, represented by the Communications Workers of America and the International Brotherhood of Electrical Workers say that Verizon’s $10 billion net income is more than sufficient and that the company is “destroying middle-class lives.”

“It’s true that wireline is losing lines, but many of them are going to Verizon Wireless,” said Robert Master on behalf of the wireline workers on strike. “Regardless of how many lines they’ve lost, they’re obviously operating as an enormously profitable company. Considering these profit numbers and the huge amount that Verizon’s top executives are being paid, it’s not fair that our members are the ones to have to make sacrifices.”