Why Multitasking is Hazardous to Your Health and Productivity (Infographic) 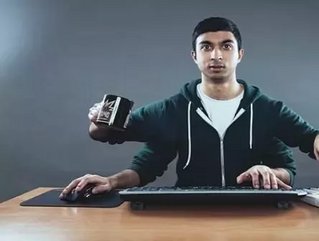 If you’re of the opinion that there is no such thing as doing too much at once, you may be overextending yourself. While it’s clear that stress is harmful to the body, what’s not as obvious is the fact that our brains aren’t equipped to handle more than two tasks at once. So, during those times that we think we’re conquering the world with the power of our digital devices, in fact, we’re processing less information and struggling to commit things to memory.

The infographic below, created by OnlineUniversities.com illustrates this misconception adeptly. Using data compiled from a variety of studies, the infographic points out that 61 percent of adults admit to being addicted to the Internet and the average computer user changes tasks more than once every two minutes.

That may sound harmless enough to some, but since the brain’s medial prefrontal cortex can only handle two tasks at a time, data has shown that frequent multitaskers are bad at filtering information, have a tough time switching from one task to another and often subconsciously choose extraneous information over task-related information.

Plus, studies have shown that too much Internet use can lower a user’s concentration, memory and ability to set goals, make decisions or feel empathy.

See more valuable facts about digital stress’s effects on the brain and get tips you can use to curb it below: