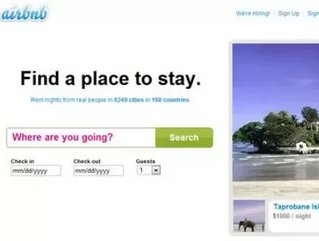 If you’re not familiar with the term “Airbnb,” you better believe you’ll be hearing much more about this company in coming days. The hotel, boat, castle, tree house and apartment-sharing service is undergoing a multi-million dollar renovation and has announced that it has closed $112 million in a round of financing led by Andreessen-Horowitz. Partner Jeff Jordan led the deal for the firm, which contributed $60 million, according to Forbes. While the firm isn’t disclosing the valuation, analysts believe the number exceeds $1 billion.

Airbnb’s last round of funding was minimal compared to today’s announcement. Funding of $7.2 million came from such companies as Greylock Partners, Sequoia Capital, Ron Conway’s SV Angel and celeb mogul Ashton Kutcher. The company only came to fruition in August 2008 and was founded by Nathan Blecharczyk, Brian Chesky and Joe Gebbia. Andreessen-Horowitz partner Jordan says Airbnb will use the new funding to expand globally adding to its fleet of 186 countries that already use the service.

Airbnb has become quite popular in the luxury rental space for the elite and the commoner because its business plan and momentum matches those of today’s massive brands, such as eBay. Airbnb came from the idea when Chesky and Gebbia thought of a novel idea to offer their apartment in San Francisco to conference guests looking for a hotel room, which were sold out one weekend. Without having actual beds to offer, the idea of using airbeds transformed into the idea for an “airbedandbreakfast,” thus creating Airbnb. Three conference attendees stayed the evening and the duo enjoyed the company of guests and a new mode for income.

Growth has been exponential since the idea, and the company has helped to book more than two million rooms in over 16,000 cities around the world.