The Most Infamous, Expensive Super Bowl Ads of All Time 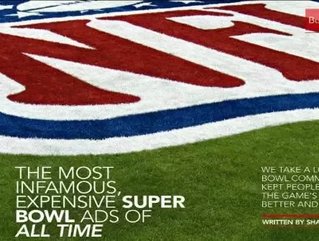 Check out the interactive version of this story in the February issue of Business Review USA!

Over the last 25 years, the Super Bowl has transformed the televised commercial break. What was once a period of time for viewers to mentally check out has become the biggest opportunity of the year for major advertisers. The average 30-second Super Bowl commercial slot now costs about $3.5 million dollars (excluding production expenses) and has the potential to create unprecedented brand buzz as the event’s captive audience grows with each passing year.

Perhaps the most remarkable branding benefit of a Super Bowl commercial is the high possibility of staying power. It’s not easy to retain the public’s interest over months, let alone years, but history has proven that a buzz worthy Super Bowl ad can keep a brand in the pop culture lexicon for decades.

This year’s Super Bowl XLVI ad slots officially sold out in early January and the pressure to deliver something memorable is as high as it’s ever been.

In honor of this branding bonanza, we’re refreshing your memory with a look at some of the best and worst Super Bowl ads from past years. We’ll start by examining the good, including the commercial that started it all:

As if it weren’t enough that Apple has revolutionized our electronic lives, it turns out that the company is actually responsible for catapulting the ubiquity of the Super Bowl commercial as well. During the 1984 Super Bowl, Apple decided to debut its commercial for the Macintosh computer. The following day, people seemingly had forgotten about the actual game but hype about Apple’s ad was deafening. (For the record, the Los Angeles Raiders beat the Washington Redskins, 38-9). The ad, directed by Ridley Scott, appeared on television just one other time since then but has held up as one of the most infamous, talked-about Super Bowl commercials of all time.

The Doritos “Crash the Super Bowl” contest, which allows consumers to create their own Super Bowl commercials, post them to YouTube and vote for a televised winner, launched in 2007, but it was the 2009 ad that was most highly acclaimed. During Super Bowl XLIII, Doritos ran that year’s winning ad, featuring an office worker predicting the appearance of free Doritos before throwing a snow globe through the glass façade of a vending machine. USA Today’s Super Bowl Ad Meter ranked the commercial as the best ad of the year and awarded its creators $1 million.

Last year, Chrysler raised the bar for Super Bowl ad supremacy by running the most expensive (and longest) ad yet. With a run time of 2-minutes, the much-talked-about “Imported from Detroit” commercial ran four times longer than the typical ad and cost Chrysler about $12 million. Rapper Eminem proved to be a formidable spokesman for the brand as this ad received a massive amount of positive attention and kicked off a strong sales year for Chrysler.

And now for the bad and the ugly:

Apple sank from the highest of highs to the lowest of lows when it followed up its ground-breaking 1984 ad with 1985’s depressing “Lemmings” commercial. Set to a creepy version of “Heigh-Ho,” this morbid ad, featuring office workers jumping off a cliff was widely criticized. After it premiered, Apple stopped advertising during the Super Bowl and didn’t join the game again until 1999.

It’s not every day that you see an advertiser compare a sex change with a hotel renovation, and that’s for good reason—it’s a terrible idea. Too bad Holiday Inn didn’t realize that before running its 1997 spot featuring a woman at a high school reunion who turns out to actually be a man. Transgender, gay and lesbian rights groups threatened to boycott and protest the company and media critics called it out for being insensitive. Holiday Inn wound up pulling the ad and apologizing for its bad taste.

Just for Feet ran an ad with major ugh-factor in 1999 in which a barefoot Kenyan runner is chased down, drugged, and outfitted with running shoes by a group of mercenaries in a Humvee. Critics called it racist, disturbing and offensive and Just for Feet later agreed that it was a bad move. Just for Feet has since shut down all of its stores after suing the advertising firm that created the ad, filing for bankruptcy, and eventually dropping the suit.

Just a year ago, Groupon committed one of marketing’s most recent substantial blunders with its “Save the Money” ad campaign. During Super Bowl XLV, the daily deals site recruited celebrities for a series of Christopher Guest-directed commercials that were poorly received, to say the least. The most cringe-worthy of the bunch was the “Tibet” ad, which seemed to mock and exploit the impoverished region. It probably wouldn’t have been met with disgrace if it hadn’t aired to millions during television’s biggest event. Unfortunately for Groupon, it did, and was deemed inappropriate by viewers and media critics alike.

One Twitter user summed up the gaffe succinctly by saying, “Groupon seems to have achieved the unique feat of paying $3M to lose customers who previously loved them.”

Despite the subscription loss and social-media fire its brand endured, Groupon stood by its ad and clarified its intentions in a blog post.