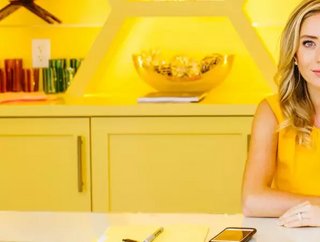 As a dating app that made its name by putting women in charge of making contact with potential mates, and is led by founder and CEO Whitney Wolfe Herd – one of the youngest female CEOs to take a company public – it's little surprise that Bumble should reach such a goal. The company's board is also 73% female.

It’s a representation, says Wolfe Herd, that “strengthens our bench with world-class talent” epitomising “our mission and values”.

Meanwhile, following the appointment of Joy Fan as Estee Lauder’s CEO for China, half of the beauty giant’s regional organisations are now led by women, a milestone that builds upon the company’s long legacy and commitments to equality and women’s advancement.

Bumble and Estee Lauder aren’t the only organisations knocking at the door of leadership gender parity, however.

Among the companies, like Bumble, with an executive leadership team that is majority female are consultancy Booz Allen Hamilton and tech firm Insight Enterprises.

This achievement is down to CEO Horacio Rozanski who is known for fostering company diversity. Under his tenure, the firm has gone from zero to five women on its 12-person board and eight of the firm’s nine top execs are women or people of colour. Not to mention the fact that 30% of its employees are veterans.

Insight Enterprises is similarly inclusive with six out of 10 (60%) executives female, giving the tech company majority-female leadership. Chosen by Forbes as one of its America’s Best Employers for Diversity 2021, Insight's CEO Ken Lamneck firmly believes “the more diverse our team can be, the better we perform”. Among its female leadership team are CFO Glynis Bryan, President EMEA Emma de Sousa, and SVP HR Jen Vasin.

Other companies on the path to gender parity include:

Nvidia – 40% female - two out of five executives are women

These achievements add to what is proving to be a positive and improving 2021 for executive equality with representation of women in top corporate roles trending upwards in recent years.

Among those making it to the top of the top companies this year are Carol Tome who took over as CEO of UPS; Karen Lynch who became CVS Health CEO in February; and Jane Fraser who made history in March when she became CEO of Citigroup, marking the first female head of a major US bank.

Of these 41 women, six are women of colour, and for the first time ever, two Black women are running Fortune 500 companies in 2021 – Rosalind Brewer, who became CEO of Walgreens Boots Alliance in March and veteran corporate executive Thasunda Brown Duckett who took over as CEO of insurer TIAA in May.

But while the numbers of women leaders in the Fortune 500 are moving in the right direction, at 8.2% compared to 6.6% in 2019, progress still remains slow.

Increasingly though, more women are being hired for other executive positions, in particular for sustainability, diversity or people-focused exec roles such as CHRO, chief people officer, chief sustainability officer and chief marketing officer.