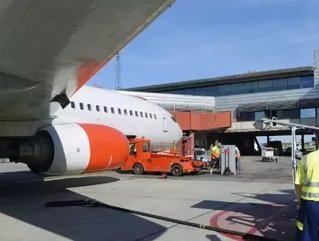 Aveos Fleet Performance Inc, which provides about 85 percent of the maintenance, repair, and overhaul for Air Canada, filed for bankruptcy today.

Meanwhile, hundreds of laid-off Aveos workers are protesting outside the Air Canada building near Montreal's Trudeau Airport, demanding that the government intervene on their behalf and warning of the decline of the Canadian airline industry.

Aveos started out as a division of Air Canada, taking care of its airplane maintenance but became a private company in 2007 when Air Canada sold it to pay off debt.

The Aveos plant in Winnipeg maintained Air Canada's Airbus and Embraer fleet, according to Lorne Hammerberg, the president of the union local in Winnipeg.

On Sunday, Aveos locked out 24000 workers in three of its facilities in Montreal, Winnipeg, and Vancouver and the workers were told to not return to work.

Air Canada does not seem too concerned about the loss of its main maintenance provider, saying in a press release: "These events at Aveos, while disappointing, have no impact on Air Canada's day-to-day aircraft maintenance and repair activities.”

"Should Aveos not be in a position to perform work, the airline is prepared to make arrangements with a number of other service providers, located primarily in the United States and Canada, with whom Air Canada has longstanding relationships."

Air Canada’s seeming callousness may be because the airline has more pressing internal matters to deal with as the airline bickers with different employee unions over new contracts, pay, and operational changes.

Last weekend, the airline experienced significant flight delays and cancellations due to a record number of pilots calling in sick this past spring break weekend. There were other factors such as bad weather and a utility fire in the Toronto airport but the airline has tapped the Canadian Industrial Relations Board to intervene in the matter of too many “sick” pilots.

"While Air Canada supports the right of its employees to book off when they are unwell or otherwise unfit to work, we cannot condone such activities as part of industrial action to disrupt our operations and we have asked the CIRB (Canadian Industrial Relations Board) to intervene," said Air Canada spokesperson Peter Fitzgerald.

This is the latest in Air Canada’s disputes with different worker unions as the airline seeks to change operation policies in an attempt to save money.