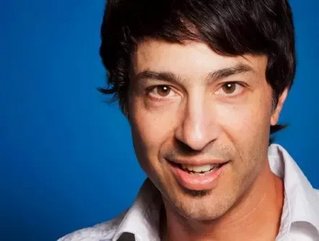 READ THIS ARTICLE IN THE JANUARY EDITION OF BUSINESS REVIEW USA

Arj Barker, comedian and star in HBO's "Flight of the Conchords" was kind enough to join Business Review USA for an interview. He discusses his journey to success, insights into creativity, technology, and more. Backstage in San Diego, he also joins us along with fellow Californian, comedian, and friend Tony Camin- both star performers in the infamous comedy show "The Marijuana-Logues".

Building the sort of loyal following Barker has cultivated is tough work to say the least. And you can be sure there's much to learn about creativity and success from one of comedy's greatest superstars. I mean, we're talking about a guy who's stand-up material spans concepts as original as singing “America The Beautiful” on Afghani Idol, liberating his shower from a cruel soap, and botoxing his scrotum to keep up with the LA look. And we're barely skimming the surface of his comic genius here. (Watch the videos, I promise it's all as hilarious as it sounds and then some).

Whether you're hungry for tips to enchant an audience, searching for knowledge on the creative process, or are simply a fan of Arj, you can be sure there are critical lessons to be gleaned from his words. Here's what he had to say:

BR USA:How do you come up with your material? Is there a blueprint to "funniness" that you've figured out by now, or does the material arrive organically through life experience?

Arj:I haven't found any distinct process for writing material, but I do carry a notebook on me in case I find something funny. It could just be a funny idea that later on evolves into a joke. Four or five years ago I thought of the saying things to do before you die.I thought of taking that in a literal sense, and it took several more years to turn into a joke. In the end it turned into something like slap a grizzly bear in the face, sing the American national anthem on "Afghani Idol". These are things you do before you die. Initially it just hit a cord. It starts as a raw idea like that. Other times a fluid joke comes into my head. If there was an actual process for which to write jokes I think I would be more famous. Coming up with new material that kills is one of the hardest parts of the job.

BR USA: Standup comedy and show business in general are pretty competitive fields. Yet, you've enjoyed a good degree of success and fame. What do you think has been the secret to your success?

Arj:I don't think about it that much to be honest. But I think it’s a mixture of luck and perseverance, and I think I am sort of, you know, "somewhat original", but I don't want to make it seem like I'm tooting my own horn. I think if you do something original enough people will pay attention. I work pretty hard to do my own thing.

But I also think it’s a little bit of luck. I mean, I ran into one friend who was doing shows in England, and I asked for an address and sent three tapes. Heard back from one guy and he brought me back over there, and I started doing shows in London. Almost like starting over. It was really difficult. I got up to speed and from England, went up to Edinburgh, where I won an award - that was in 1997. While in Edinburgh, I met a promoter from Australia who happened to see my show. She invited me to Australia, and I went not knowing what to expect. I had a great time and kept working there - that was about ten years ago.

Now Australia is by a landslide my best market. And that's all come from running into someone you know. A lot of it was being at the right place at the right time. And that's why I say it's a mixture, and I imagine it's true for a lot of industries. I believe being prepared and by working hard so when the opportunity arises you're ready.

BR USA: There are several styles of comedy, how did you find your groove and style when you were first starting out?

Arj:I think it’s an ongoing thing. When I first started I was very monotone.

Arj:Not quite like that. But I started pushing to bring more depth and color to the performance. And then I sort of fell into a rut where I started yelling a lot, and I sort of became the comic who's known as the guy who yells. I do like yelling, but I do believe now that less is more. I'm more comfortable than ever with my performance style, but I wouldn't say I'm done. I'm always trying to learn.

The thing I discover more and more is pulling back on the energy, which can be just as effective as putting the pedal down, you want to create that shift in emotion. But I still explore and If I'm in a goofy mood I like to mix it up, but I never want to be finished because that seems like it would be boring.

BR USA:Why do you think your material clicks or resonates more with Australian audiences?

Arj:I don't think it has anything to do with material "clicking" as much as the level of exposure I got over there was greater. Simply because they perceived me as a greater success over there, so they thought, "this guy must be a big deal". I got invited into more TV shows over there. Plus at the time there were less channels in Australia, it was sort of like our TV might have been in the 80's (in the US).

So when I would do a late night over there - their equivalent of late show or Conan - a s**t load of people would see it, like 10 percent of the country. Which is a lot, obviously. So it would make a real difference. And people start to figure out who you are, and it began to snowball. It was the ability to get greater exposure and achieve that critical mass where people start to know you.

I've come close to scratching that here with Flight of the Conchords, but not quite enough. Back in Oz I'm playing theaters. It's a whole different ball game. I actually think I happen to be one of the top comics, just not in my own country. Which I think is the most interesting part of my career. I have a career here, but it’s so different. Like a Cinderella story. It’s funny, but it also puts things in perspective. And if I have a bad night here I just go back to my happy land. But I believe in trying to have good time no matter what. I'm here working with my pal Tony Camin. Tony Camin he's a great comic.

BR USA: What advice would you give to younger people out there who are trying to pursue a less than conventional career path?

Arj:I'd say go for it because, I know it sounds cliché, but you might regret it later if you don't. Having said that, I'm not against having a backup plan.

BR USA: Did you have a backup plan?

Tony:He had a wallpaper business. And he was good.

Arj:Yeah, I was a semi-professional wallpaper hanger. I don't know if I would've done that. I had skills. But I didn't have a degree so I would've had to figure something out.

BR USA: How did you first get into standup?

Arj:I just went and signed up for an open mic. It took a lot of gathering up my nerves and I did have jokes prepared - my first jokes. I didn't know if I was good or bad, but I finally did it. I chickened out the first week, and then went the week after.

BR USA: Why did you want to do it?

Arj:I just wanted to do it, and my friend pushed me on stage. That is where it all started.

BR USA: Where should viewers go if they want to get more information about your shows, specials, and appearances?

Arj:There’s arjbarker.com, but I also have a lot of material on YouTube.