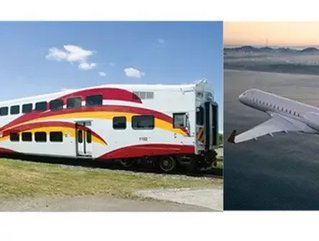 "In 1992, during a global economic downturn, Bombardier acquired the de Havilland Canada aerospace plant, and the Urban Transportation Development Corporation (UTDC) in Thunder Bay and Kingston," said Mr. Beaudoin. "Bombardier invested in the facilities and employees in Ontario, believing that they had what it takes to help us become a world-class maker of planes and trains. Today I am proud that our 6,200 employees in Ontario contribute more than $2.7 billion to the Ontario economy, and generate more than $650 million of business for nearly 300 Ontario-based suppliers."

Bombardier’s Ontario aerospace manufacturing prowess includes the production of the following planes: the Q400 NextGen turboprop aircraft, the Global 5000, the Global 6000, the Bombardier 415 amphibious aircraft, and key components of the Learjet 85 and CSeries commercial aircraft. In the future, these plans will add the Global 7000 and Global 8000 business jets to its operations. Bombardier Transportation manufactures the BiLevel GO Trains, the new TTC Rocket subway cars, Toronto’s streetcars and Metrolinx Light Rail Vehicles, the O-Train,  and the INNOVIA monorail system.

"Just as Bombardier employees can point to trains and planes around the world and say: 'I built that,' we can look at the partnership between Ontario and Bombardier and see that we've built a lot, together," said Ontario Premier Dalton McGuinty. "Ontarians have invested in skills, education, infrastructure and a strong society. Bombardier -- with its advanced manufacturing, strong R&D and world-class products - has not only made the most of Ontario's competitive advantages, it added to them."

With this success, Bombardier is sharing Ontario with the world. Bombardier transportation solutions are utilized globally.

"We are very proud that the planes and trains Bombardier makes right here in Ontario move thousands of Ontarians and people around the globe, every day," added Mr. Beaudoin. "Here in Toronto, as the largest manufacturer in the Greater Toronto Area, we build the planes that Porter Airlines flies, as well as those flown by Jazz and Sky Regional under the Air Canada Express banner. We look forward to seeing our airplanes flying for WestJet soon. In Thunder Bay we make the GoTrains and Rocket Trains used by commuters throughout the Greater Toronto Area at a rate of nearly one a day. Bombardier's 300-strong team in Kingston is part of a centre of global excellence in monorail research and rail system design; our transit service team in Mississauga manages technical assistance, fleet operations, maintenance and vehicle modernizations for North America, and our iconic yellow water bombers that help firefighters all over the world come from our facility in North Bay. We at Bombardier are celebrating our 20-year history in Ontario as we invest in the continued evolution of mobility, making transit and transportation more efficient for travellers and greener for the environment."