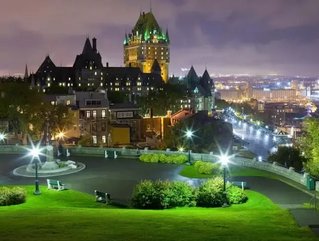 With its name derived from the Algonquin “kepék”, meaning “narrows”, Quebec City is situated on the Saint Lawrence River in the province of Quebec. It is the eponymous province’s second largest city after Montreal. According to Québec International, the city’s 2018 GDP was $35.8bn, an increase of 2.4% compared to the previous year. As of May 2018, the population was 817,408, representing 9.7% of Quebec province at large.

Along with Montreal, Quebec City forms a mega region for the development of video games, in part thanks to enticing tax credits from the government. Investissement Québec says the region’s reputation in the field can be traced back to the 1980s, with some 230 video game industry related companies in the province as of 2016, employing around 11,000 people. These companies range from traditional game developers, to educational game makers, game testing and quality control companies and game publishers and distributors.

The city’s largest game developer, with over 500 employees according to its website, Ubisoft Quebec was founded in the city in 2005. A subsidiary of French video game publisher Ubisoft, they initially worked on smaller games as well as porting Ubisoft’s larger titles to other systems. Since 2015 they have taken the reigns of Ubisoft’s AAA Assassin’s Creed series, developing the critically acclaimed Assassin’s Creed Syndicate and Assassin’s Creed Odyssey. Having just moved to new offices in the Saint-Roch District of the city, the studio recently announced its latest game, Gods & Monsters, a multi-platform title drawing on Greek mythology.

Beenox is a game developer based in Quebec City, and a subsidiary of Activision, the American video game publishing giant. Founded in 2000, according to Game Job Hunter they have over 200 employees. Specializing in both porting other studios’ titles to other platforms and developing their own games, the company’s versatility has seen them work on large titles from Activision’s stable. Projects have included a remaster of Call of Duty 4: Modern Warfare for current-generation consoles, a number of titles using Marvel’s Spider-Man property and its latest game Crash Team Racing: Nitro-Fueled. They are currently working alongside Raven Software and main developer Infinity Ward on the latest Call of Duty title.

Describing itself as being in possession of broad transmedia expertise, Frima Studio is a digital entertainment company active in video games, virtual reality and animation. Founded in 2003 in the city, the company has worked with the likes of Lego, Mattel, Microsoft, Ubisoft, and Zynga to create works based on their properties. They have also created original works such as the video game Chariot, released in 2014 and recently ported to the Nintendo Switch console. Their latest project sees them assisting Oddworld Inhabitants on development of the latest in the Oddworld series of games, Oddworld: Soulstorm.

Quebec City is one of North America’s oldest conurbations, playing a pivotal role in the history of Canada and North America at large. Indeed, the word “Canada” is thought to derive from the Iroquois word for village, in reference to a settlement at the site of what is now Quebec City. Founded proper in 1608 by Samuel de Champlain, Quebec City served as a stronghold of New France and font of French culture. In 1763, the city came under British control along with the rest of New France, but to this day the city is overwhelmingly French speaking. A consequence of this history is that the city is often considered to have a European sensibility, with intact city walls dating from the 17th century just one of many sights more commonly found across the Atlantic Ocean.

Upcoming events in the city include a convention from Unifor, Canada’s largest private sector union, from August 17 to 23 at the Québec City Convention Centre. At the same venue from August 18 to 22, the 18th International Conference on Cold Regions Engineering and the 8th Canadian Permafrost Conference takes place. Despite its historical core, Quebec City possesses a modern, forward looking economy, with good prospects for workers. According to Québec International, the average salary in the city was CA$44,963, increasing year on year by 2.6%, beating inflation of 1.5%. With its balance of old and new, the city stands in good stead to continue growing its population and economy.