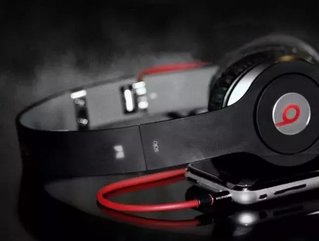 The music industry was set on fire after Apple’s rumored acquisition of Beats by Dre came to light in early May. According to reports the technology juggernaut is planning to buy Beats Electronics for a cool $3.2 billion. Co-founded by rapper and hip-hop producer Dr. Dre in 2008, Beats Electronics has become known for its high-end headphones and a recently launched music streaming service.

The rap icon behind Beats, Dr. Dre, hasn’t recorded an album for over 15 years, however he is now calling himself “the first billionaire in hip-hop” and he may not be too far from the truth. If the highly anticipated transaction is to take place, the 49-year-old would become the highest paid figure in rap.

The Beats Back Story

Beats Electronics was co-founded by Andre ‘Dr. Dre’ Young and Interscope-Geffen-A&M Records chairman Jimmy Iovine, after the pair recognized a gap in the market for a decent pair of headphones to replace the tinny ear buds that came with everyone’s MP3 players.

For a period, the company was majority-owned by Taiwanese smartphone makes, HTC, however it reduced its stake to 25 percent in 2012 and then sold its remaining stake in 2013; concurrently, Carlyle Group replaced HTC as a minority shareholder alongside Dr. Dre and Iovine.

The Beats product lines have focused largely on headphones and speakers, marketed under the Beats by Dre brand. Its headphones have become known for their memorable design and heavy bass, which according to Dr. Dre, helps users experience “all” of the music being played.

From 2008 through 2012, Monster Cable served as the manufacturer for all Beats products; the company's manufacturing operations have since been taken in-house. The company has also licensed audio technology to other companies for use in their own products, and expanded into the online music industry with its 2012 purchase of MOG, followed by the 2014 launch of its Beats Music service.

Beats' popularity was influenced primarily by its marketing practices, centering on product placement and branding deals with hip-hop and pop musicians. In 2012, NPD Group reported that Beats had a market share of 64 percent in the U.S for headphones priced higher than $100, and was valued at $1 billion in September 2013.

The Man Behind the Brand

Beats may be the brand of the moment, however the headphone company is certainly not the hip-hop artist’s first foray in business. The once-marginalized form of black pop music has always valued artistry and entrepreneurship in equal measure, and Dr. Dre is a poster child for this. Dre is the founder and owner of Aftermath Entertainment and in the past, was a co-owner and artist on Death Row Records. He has produced albums for and overseen the careers of many rappers, including Snoop Dogg, Eminem, Xzibit, 50 Cent, The Game, and Kendrick Lamar. And what’s more, he is credited as a key figure in the popularization of West Coast G-funk, a style of rap music characterized as synthesizer-based with slow, heavy beats.

In 2014, Forbes ranked Dr. Dre as the second richest figure in the American hip-hop scene with a net worth of $550 million. The acquisition of Beats by Apple just goes to prove that hip-hop has become mainstream enough to move oceans of cash and that is in no small part down to Dre himself.

Today, Beats dominates the market, having sold roughly a billion dollars’ worth of headphones last year alone. With Apple stepping in, Forbes estimates that Dr. Dre’s net worth is about to spike to roughly $800 million, besting that of Sean “Diddy” Combs and Shawn “Jay Z” Carter, two artists who redefined the trajectory of rap music with zeroes and commas and mergers and acquisitions.

It remains to be seen weather the much-hyped acquisition will take place or not, but one thing is for certain, Dr. Dre and the Beat Electronics team have managed to create a multi-billion dollar brand by looking back to their hip-hop heritage. Like the company or not, like the headphones or not, its undeniable that when it comes to branding, Beats have played a blinder. After all, many critics will tell you that there are higher quality products on the market, but to catch the attention of global players like Apple, you need a world-class brand and loyal following. Beats certain have that.