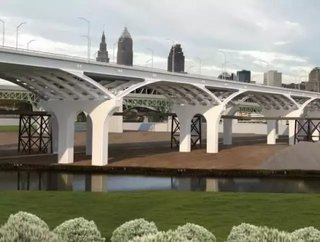 As years progress, even the most solid infrastructure begins to show signs of wear and age. This was the case with Cleveland’s I-90 Innerbelt Bridge, which carried thousands of commuters and goods across the Cuyahoga River every day. Built in 1959, the truss bridge began to succumb to corrosion and structural deterioration. After studies to determine the best course of action, the Ohio Department of Transportation made the decision to demolish the existing bridge and replace it with twin bridges to usher eastbound and westbound commuters with unprecedented efficiency. With the westbound bridge already built, the joint venture group Trumbull-Great Lakes-Ruhlin (TGR) was selected to move forward with a design build plan for the eastbound George V. Voinovich Bridge Project.

The project at hand

Trumbull-Great Lakes-Ruhlin joined together in 2013 to commence work on the Innerbelt/George V. Voinovich Bridge Project, along with designer URS who designed the new bridge from ODOT’s concept drawings. The project consists of two key parts: demolish the original existing bridge, and rebuild a new bridge in its place, owned by the Ohio Department of Transportation. With demolition complete, the project is now in its building phase, constructing a 4,000 ft bridge in a Delta Girder style.

“Its primary design—the main span over the river and the valley—is 2,800 ft long,” says Jason Tucker, TGR construction project manager. “It is a 10-span structure that is a Delta Girder modified design. It will be five lanes and with full shoulders, so it’s about 100 ft wide. The approach span is a four-span conventional girder bridge with similar width, and the length of that is 1,200 ft.”