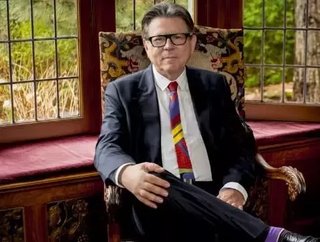 Michael Hirsh, described as ‘the Canadian product of mixing Warren Buffett with Walt Disney’, is a giant in the animated television sector, having co-founded the renowned Nelvana with Patrick Loubert and Clive A. Smith in 1971, and continuing his career in children’s television to the present day. Nelvana has produced some of the most memorable and highest-quality cartoons of all time, including The Care Bears, Babar, and The Adventures of Tintin.

“When I was a kid, about four or five years old, I made my career choice,” Hirsh explains. “I wanted to grow up and either be Mickey Mouse or Superman. I watched a lot of cartoons and read a lot of comic books, and eventually realized that it would be easier to be Mickey, so that helped my decision.”

Hirsh’s path was set. He and his partners founded Nelvana on a shoestring – just enough for the business registration fees – and the first seven years were dedicated to learning the business.

“Every few years we’d risk everything in innovation,” says Hirsh. “Over 30 years at Nelvana, we had at least five major crises, all of which required different solutions. At any one time it would have been better to declare bankruptcy, but we said ‘hell no’ and continued to work through the disruptions to find a solution. We lived on the edge and never stopped being risk-takers.

“When facing a business crisis, it was a hard lesson to learn how to manage it, how to solve the problems and get to the other side. It was challenging, but I learned how to keep everyone calm, cool, and collected.”

“A vast amount of people got their careers started through Nelvana,” Hirsh says. “They got trained by me and my partners, and are now running their own successful studios – not only in Canada but in other countries. In the process, we pioneered many of the worldwide coproduction, marketing, and distribution techniques which have become standard industry practice.”

It’s no wonder Hirsh is recognized throughout the industry as a leading business and brand-builder. The company’s first big break came a few years after its inception, when George Lucas chose Nelvana to create a 10-minute Star Wars cartoon which led to two series – but even more important to the business was Hirsh persuading the owners of The Care Bears to have Nelvana produce their film and series. This placed Nelvana firmly on the map.

“We really focused on our core business: kids,” says Hirsh. “We then grew into computer animation with the acquisition of Windlight Studios, and from there we computerized our 2D traditional animation and added 3D. We started our own distribution company, allowing us to retain rights of our properties, and became very good at securing the rights to other valuable properties.”

Nelvana was sold to Corus Entertainment in 2000 for $540 million, and Hirsh continued as co-CEO until 2002. Two years later, he led a consortium which acquired the remnants of Cinar Corporation, became CEO, and rebranded it as Cookie Jar Entertainment.

“Having sold Nelvana and staying on for two more years, I missed having my own company,” says Hirsh. “In Cinar I saw the opportunity to build another kids’ entertainment company using the skeletal bones of what was already in place.”

Cookie Jar Entertainment went on to become one of the world’s largest privately-held children’s entertainment companies. It was acquired by DHX Media in 2012, at which point Hirsh became Executive Chairman and served on the board until the end of 2015.

Hirsh is – rightly so – extremely proud of having built Canada’s children’s television industry, giving opportunities to over 10,000 artists. He has been granted the honor of many awards over the years, including three Daytime Emmys, and his expertise has also earned him invitations to act as keynote speaker at various industry events and film festivals. But after working for so long in children’s television, how has the sector changed since 1971?

“It has gotten better and better,” Hirsh says. “All the changes that have happened in TV have helped made kid’s TV better. When I first started there was no real market in Canada, and the US had three stations with CBS, NBC, and ABC. Now, there are at least 1,520 kid’s TV channels in Canada and the United States is the same. Platforms like Netflix and Amazon have also added unlimited shelf space, creating greater opportunity for an even larger variety of programming, satisfying the needs of children and parents.”

As a consistently successful entrepreneur, what advice would Michael Hirsh give to others looking to gain a foothold in this industry?

“Whenever times get tough, visualize Bugs Bunny or Roadrunner crossing over the canyon, never looking down and just getting to the other side. The cost of you looking down is falling. Keep moving forward and stay focused, envision your goals, and they will be achieved.”