Nissan Versa Note and Nissan Resonance to Debut in Toronto 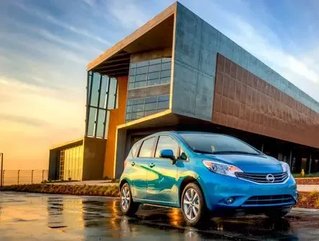 Nissan announced today the national debut of the 2014 Nissan Versa Note and the Nissan Resonance Concept at the Canadian International Auto Show in Toronto on February 14th.

"The all-new Versa Note, and a global concept presenting an intelligent, fresh crossover alternative for Canadian consumers, are just two of the many future products coming from Nissan," said Judy Wheeler, Director of Marketing at Nissan Canada Inc. "Nissan welcomes Toronto auto show attendees to see what 'Innovation that excites' is all about -  with our new Virtual Showroom hologram display, and our exciting 2013 Nissan model lineup, including the all-new Altima, Pathfinder, and Sentra, in this special preview of what's ahead."

Inside Nissan’s booth, auto show guests will be able to get up-close and personal with the Nissan Versa Note, a 4-door hatchback, is the fourth of five models launched by Nissan over 15 months. Additionally, the Nissan Resonance concept will share with guests where Nissan is planning to take its crossovers in the future.

Visitors of the auto show will also be able to  connect with Nissan Canada vehicles in a different way at the Nissan booth through its Virtual Showroom 3D Hologram display.  Utilizing a high definition holographic video projection system, Nissan will create the illusion of 3D moving images. Guests who perform specific physical gestures will be able to interact with virtual Nissan vehicles.

Other excitements offered at the Nissan booth will be guest appearances by 100th Grey Cup champion, the Toronto Argonauts and the Argos cheerleaders.