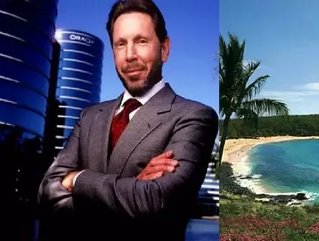 We’ve all dreamed of being rich enough to buy an island in paradise, but Oracle CEO Larry Ellison is pushing wishful thinking aside and making it happen for himself.

Ellison—the third richest person in America and the sixth richest in the world—is currently closing in on a purchase of 98 percent of Hawaii’s Lanai resort island.

The exact price tag is being kept a secret, but local Hawaiian news outlets have said the asking price is $500 million to $600 million—a mere chunk of Ellison’s $36 billion fortune. Oh yeah, and according to the application, he’s going to pay cash.

“The buyer anticipates making substantial investments in Lanai and is looking forward to partnering with the people of Lanai to chart the island’s future,” the purchase application read.

“It is my understanding that Mr. Ellison has had a long standing interest in Lanai,” said Hawaiian Governor Neil Abercrombie in an announcement about Ellison’s purchase. “His passion for nature, particularly the ocean, is well-known, specifically in the realm of America’s Cup sailing.”

Lanai is known as Hawaii’s “Pineapple Island” and was once owned by the founder of Dole Food Company. The island’s most recent owner is 89-year-old billionaire David Murdock, who acquired it when he bought Dole owner Castle & Cook, the firm that obtained ownership of Lanai when it acquired Dole. Murdock says that he will still keep a home there.