Screenwriter James Dalessandro Discusses the Future of Television and Cinema 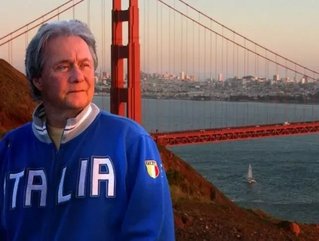 James Dalessandro, the writing partner to Paul Haggis, one the nations’ most admired and influential filmmakers, has been creating unforgettable pieces of fiction since hitchhiking to San Francisco in the early 1970s. Since then, he has claimed his position in the publishing and filmmaking industries through his involvement with major motion pictures like Crash. I sat down with the Cleveland -born icon, 66, to chat about his extraordinary career, his thoughts on the evolving digital world, and surprising details about a historical epic that landed his writing in Playboy and will soon be broadcast as an FX miniseries.

First, tell us how you got your literary start.

“I was born in Ohio to a truck driver and a housewife. I played every sport and read every book I could get my hands on and knew at the age of seven that I wanted to be a writer. In 1971, I hitch-hiked to San Francisco to join the "Beat" poets, but I was 10 years too late, so instead I founded the Santa Cruz Poetry Festival, the nation's largest literary event, with Ken Kesey and Lawrence Ferlinghetti. Ten years later, I went to UCLA film school and promptly sold five screenplays. I published a highly acclaimed San Francisco noir mystery, "Bohemian Heart" in 1993, and in 2004, my opus, "1906: A Novel" became a best seller and sold to Hollywood after a bidding war between Dreamworks and Warner Brothers. Since then, I've written the screenplays for all my books.”

Having been involved in film for more than two decades now, what would you say is the boom area in American film and television?

“Film is dominated by sequels and huge effects movies like Transformers and Pirates of the Caribbean: This Time it's Meaningless. Television is the salvation of great drama, great characters and stories – à la Breaking Bad, Sons of Anarchy and Justified. These are not the traditional 22-episode, one story per week "episodic" series of the past. These are 13 episodes, with a serial component: one story that plays out over 13 weeks and keeps people coming back week after week to see how the characters progress."

Do you think this is the reason television has become the go-to medium for great story-telling?

“Absolutely. It's a writer's medium. Writers run the shows and all they care about is good story telling. Television gives writers the chance to take risks for a captive audience. I like to say that ‘film is something we do; television is something we are.’

Breaking Bad is a prime example –it’s an off-beat story about a guy none of us would like in real life, and yet we sucked up every minute of it. The Anti-Hero—the world that guys like Paul Newman, Marlon Brando and James Dean once inhabited is back, but it's on television.”

You have written some historical epics – ‘1906’ in particular - which seem to be popping up all over television now. What started that trend?

“Who doesn't love history, historical epics? HBO and Showtime started it on premium cable with the Turdors, Borgias, Boardwalk Empire. In 2013, the History Channel broadcast "The Hatfields & McCoys," six-hour mini-series that 16 million viewers tuned into. That opened the flood gates to historical epics on network and basic cable.”

Do you think the historical epic trend will stick in the coming years?

“I have a half dozen stories like that, all under development with some producing partners in Los Angeles. We're all going to see a remarkable explosion in quality, historical epics in the next decade. Which is great news for me. When they rang the bell for great historical epics written around great characters, both known and unknown, I had a file full of them.”

Which epic stands out most in your mind?

“In 2010, I wrote a 7,000-word story in Playboy called "Petrosino"– the true story of a shoeshine boy drafted into the NYPD to fight a crime epidemic in the Italian neighborhood. Over the next 26 years, Joseph Petrosino re-invented American police work and nearly stopped the Mafia before it took over New York. His partner was an obscure Police Commissioner named Theodore Roosevelt, who became his lifelong friend and partner in battling the Mafia. It's the real "Godfather" story from a different point of view— this time, in the eyes of the guy who almost stopped them. I’m now the Writer and Executive Producer for a 10-hour FX series based on "Petrosino" with my pal, Bobby Moresco, Oscar winner for Crash and Million Dollar Baby.”

People have long been advised that movies are a bad investment. Are there any strong investment/business opportunities in film or television?

“Film has always been a risky investment: you invest a ton of money in a one-shot-deal. If you don't find an audience in the theater, the potential value for DVD, television, or foreign sales is seriously threatened. Television, on the other hand, is a boom area for investors. Home theaters are exploding, quality television – American television – is hot the world over. Between foreign television sales, re-runs and syndication in the U.S., a $16 million project like “The Hatfields & McCoys” will earn several times that amount, and continue to earn for years. Once you're on the tube in the U.S., the value of the show is locked in.”

How has publishing changed with e-reader formats?

“I'm one of those rare writers who does books, film and television with some degree of success, so I'm familiar with the connection between the worlds of publishing and media. Since more people now read digital books than printed, I tried for 20 years to get my novel, Bohemian Heart reprinted in a digital format. The detective thriller got amazing reviews and had an avid following, so I saw the medium as necessary. Last week, it was released in digital and sold 1,000 copies in one day. That alone shows the importance of the digital age in the publishing industry today.”

“Crucial. Books, films and television rely upon websites and social media to succeed. Indie producers and people who self publish have found that, with

social media and word of mouth, they can succeed. It's called "the platform." When 1906: A Novel came out just before the 2006 Centennial, I was deluged by media requests. I did CNN, Voice of America, Clear Channel, Fox News, NBC National News, NPR's All Things Considered - you can't buy that kind of attention. So, stories with a built-in appeal are always strong bets, but writers/experts with built-in followings are also highly marketable. That latter – experts with followings – are a staple of reality television. Look at Pawn Stars - the only reality show I watch.”