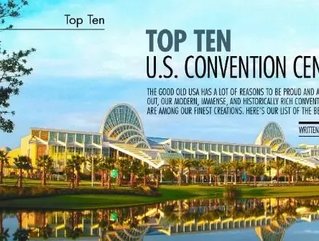 San Diego’s convention center is conveniently located near the City’s vibrant Gaslamp District and its sunny shore. Its design sets it apart from the standard conference arena—the 90,000-square-foot Sails Pavilion is marked by distinctive fiberglass “sails” that pay homage to the City’s maritime history. The annual Comic Con International convention has called San Diego home since 1991 and recently announced that it will continue the partnership through 2015.

Recent renovations have made the Anaheim Convention Center one of the country’s most state-of-the-art facilities. In the past, it has been the site of the Winter NAMM Show, the Anime Expo, BlizzCon and the Medical Design and Manufacturing Show, but it’s also home to the Anaheim Bolts Soccer League. Last year, Microsoft held its Build Windows conference here and detailed Windows 8.

Spanning three main halls, including a three-level exhibition hall and two underground halls beneath Yerba Buena Gardens, Moscone Center is San Francisco’s largest convention space and the host of Oracle OpenWorld, Macworld and the Apple Worldwide Developers Conference. Ironically, the center is named for slain San Francisco former mayor George Moscone, who actually opposed development of the area in which it was built.

Downtown Phoenix’s convention center is a true multi-functional space. It hosts everything from national and regional conventions to consumer events and theatrical productions and has attracted increasing amounts of tourism and financial support to the City since it opened in 1972. A recent expansion tripled the center’s size and further enhanced its regional aesthetics.

Each year, more than a million people visit the GWCC and are able to make the most of its comforting on site amenities, as it offers a FedEx Kinko’s office, Starbucks cafes, a gift shop, Wi-Fi, full IT management, a concierge desk, a food court and a full restaurant. The GWCC also hosted several events during the 1996 Summer Olympics.

The Dallas Convention Center has a solid place in music history. In 1976 it was the site of one of Elvis Presley’s most legendary live shows and in 1978, Queen performed here and later filmed the music video for “Fat Bottomed Girls” on site. But it’s also known for being the home to the country’s largest column-free exhibit hall and the world’s largest heliport/vertiport.

It’s no surprise that the Walter E. Washington Convention Center, named after the City’s first home rule mayor, has held a variety of inaugural balls and government summits. But it has also hosted the world’s largest sit down dinner and received several distinctions for its sophisticated, earth-friendly design.

Chicago’s McCormick place has the distinction of being the largest convention center in the US. Its four interconnected buildings located on and near the shores of Lake Michigan are all noteworthy, but special accolades must be given to the West Building, which has 250,000 square feet of meeting space, including 61 meeting rooms and a 100,000-square-foot, football field-sized ballroom.

Central Florida’s OCCC is a massive center, offering 2,100,000 square feet of exhibit space in its 7,000,000 square-foot complex. But it’s not just size that brought OCCC to the top of our list. The OCCC provides Central Florida with a remarkable amount of economic benefits at no cost to the county’s citizens and it is estimated that activity in the center yields an annual tax savings of $87.50 per Orange County household. This self-proclaimed “Center of Hospitality” offers amenities to please (including massage services, three full-service restaurants, eight food courts and remote airline check-in) and was the staging area for relief operations for Hurricanes Charley, Frances and Jeanne.