Would you like fries with that? How fast food beat technology 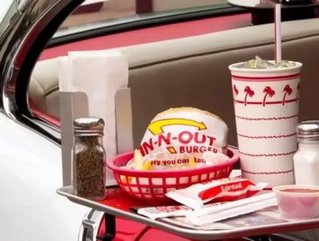 The next time you consider threatening your academically-unmotivated child with the prospect of amounting only to the role of burger flipper, you may need to rethink your approach—according to a survey conducted by Glassdoor, In-N-Out Burger’s employees are happier than Apple’s. (That, plus the fact that threatening your child as a means of motivation is pretty backwards…)

The purpose of Glassdoor’s survey—known as the Best Places to Work in 2015, or the Employees’ Choice Awards 2015—is simple: determine the best places to work in the US and UK by talking to the people who actually work there. Using a 5-point scale, respondents answered questions to help determine the pros and cons of the job, levels of satisfaction, likelihood to recommend employment to a friend, in addition to establishing pay rate, insurance benefits, perks, work-life balance, opportunities for growth and continued training, and more.

Related: How to create a benefits package to help attract and retain employees

Results from the seventh annual survey placed the fast food stand-out at #8, while Apple did not make an appearance until #22. This is the first year In-N-Out Burger has made the list and we have to ask:

When did managing meat become more appealing than toying with technology?

Actually, it hasn’t: In-N-Out Burger is the only fast food restaurant on the list. However, the satisfaction levels of In-N-Out Burger's employees are rather appealing and certainly worth discussing—not to mention applauding.

While the fast food industry is known for poor pay and even worse treatment, In-N-Out Burger has managed to stand apart from the negative perception shared by its competitors. Case-in-point: While the median hourly pay for fast food workers in the United States is $8.94, the starting wage at In-N-Out Burger is $10.50. In addition, while employees of industry giants like McDonald’s and Burger King continued to participate in an ongoing protest over the unfair treatment of fast food workers earlier this month, representatives for the 8th Best Place to Work were nowhere to be seen.

In an email to The Huffington Post, In-N-Out Burger’s vice president of planning and development, Carl Van Fleet, sums up the company’s outlook toward employees:

"We strive to create a working environment that is upbeat, enthusiastic and customer-focused. A higher pay structure is helpful in making that happen, but it is only part of our approach. It is equally important to treat our associates well and maintain that positive working environment in all of our restaurants."

Apple, on the other hand, was commonly described as having a demanding workload; requiring long hours; and allowing (or even promoting) a “secretive culture” that does not focus on the interests of employees. And although the perceived status of working at Apple—in addition to an enticingly competitive salary—may be enough for some, the cost of losing one’s work-life balance in a less-than-ideal environment is often regarded as too high of a price to pay.

We can assume that most business professionals would not trade their office doors for a drive-thru window; however, while In-N-Out Burger may not have been at the top of many professionals' “what-I-want-to-be-when-I-grow-up” lists, the fast food chain can certainly teach companies like Apple (and the 40 others that ranked lower on the list) a few lessons on employee satisfaction.