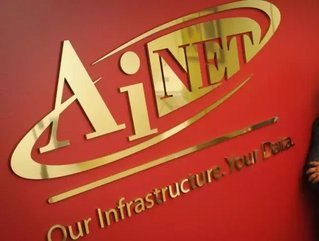 As anyone knows who was in business before then, the beginning of the 1990’s was effectively a pre-internet era. Nothing was standardized and few people foresaw the transformations that would take place in the ensuing two decades. All the more remarkable then that a young high school student in Columbia, Maryland, had the vision to start up a business that today owns and operates more than 800,000 square feet of data center space, supporting it with its own private fiber network of more than 10,000 miles.

Deepak Jain was just 17 when he founded AiNET, in 1993. Mark Zuckerberg would have been nine. “There were opportunities in the market place that made sense to me at the time,” he explains modestly. These opportunities were around the area of dial-up internet access, which some of us remember with no affection at all — but AiNET was one of the first providers, and people had to have it. “I understood the direction I wanted to take — so I managed to borrow $300 and set up in my mother's basement.”

To explain this level of entrepreneurship and confidence at such a young age Jain thanks his parents. “I had used a computer since I was six or seven because my parents did not want to keep buying me toys.  They handed me a computer and some books and said if I could learn how to use this I could write my own games. That sums my childhood up in a nutshell!” Without formal IT or business training, it was the potential of technology to change lives that fascinated him: even his business was initially conceived as way to pay for an absorbing hobby, and when the time came he chose to follow a BA course in Molecular Biology at Johns Hopkins University, graduating in 1997. With his background, it came out of the blue at him that he would be nominated 2001 Young Entrepreneur of the Year by EY.

A habit of growth

These were times of extraordinary growth for the new company. In a couple of years it had evolved into a pure ISP provider, a service obtainable from very few companies at that time, and had attracted some international clients.  “We grew fast, doubling from month to month, but the breakthrough came when I had a call from Mark Cuban and Todd Wagner.” Cuban and Wagner founded Audionet in 2005, which morphed into Broadcast.com three years later and was bought up by Yahoo! in 1999 for $5.7 billion. “We engineered their solution and supported them with our servers right up to the takeover.”

The relationship with Cuban and Wagner shifted AiNET into a space that did not exist at the time, but foreshadowed its growth into becoming one of the world's foremost data center providers. “We grew through IBM and GE and Lockheed Martin and other companies. We were getting huge requests from these large companies, yet the internet was very small then. There was not as much bandwidth available as they needed: Yahoo! and other businesses were growing very fast, doubling and tripling their requests to us every few months.”

He soon found he could no longer meet this demand simply by adding more servers. “The company had grown on its IP services platform, but to do that well you must meet very specific structure and infrastructure requirements. The machines need to be running 24/7. They need to have good power, good cooling, good physical security, and be robustly built. We were retrofitting existing buildings to make that happen.” Renting and managing space in third party data centers was a short term solution to the capacity need, but he found that the lack of reliability and control was not good enough to satisfy his commitment to his customers. AiNET set out a policy to acquire or build its own facilities and this it has followed since 2003.

AiNET purchased and updated its first data center in 2003, then started to build its own facilities. In the process, he realized that most of the standard construction practices were simply wrong. Even those MEP (mechanical, electrical and plumbing) engineers who specialized in data center construction were failing to understand that standard building trade approaches were not working in the best interests of the end users. “The first thing they do is to figure out the maximum power it will ever need and customize the hardware to cope with that. That means a huge investment before the building can take in its first customer server.”  Over a decade, he argues, the requirements will dramatically differ from the projected design, and customer need will no longer be met.

AiNET's approach is much more flexible. InfraGuard, based on a portfolio of patents, is 25 percent more efficient than competing systems. Most recently, on June 17 this year the system added a patent from the State of Israel to awards from Europe, Japan and the World Intellectual Property Organization (WIPO). InfraGuard could be developed in the face of received wisdom in the industry because AiNET is a vertically integrated owner, operator and builder of data centers. “The standard design for a data center is to have two power feeds from the utility,” he explains. “Either one should be able to power the whole building and if both fail you switch to generators – these have to be connected and synchronized, a risky and complex process. Our design means that you don't have to synchronize – each system is independent. Our design does away with the single points of failure (SPOF) that abound in the traditional model.”

It was further made possible by the company's culture of innovation, the acknowledgment that what works today may not work tomorrow. “We're always questioning our own processes and constantly asking how we can make them better, even when we are already ahead of the curve. How do we perform on cyber security penetration tests? How do we feed power in to our data centers? How are we cooling the infrastructure? Saying this is good, but is it good enough? We will never rest on our laurels, and will always be our own strongest critic.” And AiNET will always focus on the most challenging 25 percent of its clients' problems, he promises.

In February 2014 AiNET purchased One Market Center for $20 million. It is the largest data center in Baltimore. Standing seven stories high, and across the street from Baltimore’s historic Lexington Market, it is home to a host of networks, including every major telecoms carrier; Level 3 Communications, XO Communications, Comcast, FiberLight,  Zayo, Believe Wireless, Verizon, E911, Internet2, Windstream and Cogent- the last two having since expanded their presence there. One Market Center is a "carrier neutral" data center facility, meaning customers have choice of the ISP or provider they use to connect them to the internet and the world. It's connected to all of AiNET's data centers, which offer nearly a million square feet of space, using AiNET's 10,000 mile private fiber optic network. This single data center directly supports over 25 percent of the world's data traffic.

You need two things to run a data center well, Jain believes: reliable power and reliable communications. As the largest privately held communications network in Maryland, Washington DC and northern Virginia with 10,000 miles of its own fiber lines AiNET can offer its clients an end to end experience, with no third party involvement, that no competitor can match.

It's no wonder that US government agencies as well as large corporations are locating their servers in AiNET facilities. The stability of the partner is critical in both the public and the private sector. Since that initial $300 (which has doubtless been repaid) the company has grown on its own revenues it has remained debt free and investor free – what acquisitions it has made have been self-funded.  As Deepak Jain puts it: “Our company has no outside stakeholders. No one looking for a return on their money. No disinterested related parties. We are healthy with a sensible internal return on our success. I’m aware of no organization of our size or capability that can make the same claim – most are simply borrowing money until the day they can exit.”

Looking forward, AiNET will undoubtedly be expanding geographically – it is currently eying up Hong Kong. However, Deepak Jain's vision is already very close to realization. “Ten years ago we set ourselves a goal to touch every internet transaction in the world: back then that seemed far off but today we are very close.” Not unexpectedly his vision has simply expanded further and a project has been started that aims to bring food security to the poorest parts of the planet. “If that comes to fruition in my lifetime it would be amazing.”