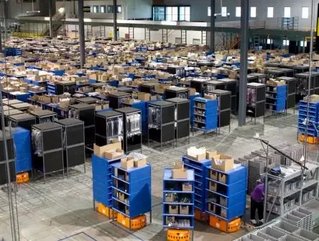 Amazon has announced that by the end of the second quarter of 2012, it will be the proud new owner and operator of Kiva Systems, a company that makes bright orange robots designed to fill warehouse orders.

The $775 million cash purchase is part of Amazon’s growth plan for the year, which also includes the addition of 17 new warehouses, for a company total of 69.

“Kiva’s technology is another way to improve productivity by bringing the products directly to employees to pick, pack and stow,” said Amazon Vice President of Global Customer Fulfillment Dave Clark. “Kiva shares our passion for invention, and we look forward to supporting their continued growth.”

Kiva’s robots enhance automation by moving through warehouses, picking up and moving shelves and boxes of products. They’re the creation of former Webvan.com employee Mick Mountz, who realized that the online grocer was spending too much money to fill online orders.

“[An] 89-cent can of soup was costing us $1 to get it into the tote,” Mountz told CNN. So he battled against investor doubts to build Kiva Systems into a thriving business, even though in its early days in 2002, he “heard ‘No’ 50 to 100 times.”

Since then, Kiva has picked up a variety of customers, including Amazon and its fellow retailers Staples, Walgreens and The Gap. A Kiva “startup kit” of robots costs about $1 million to $2 million while a large warehouse operation needing up to 1,000 robots will spend $15 to $20 million.

Analysts report that Kiva has been growing at an annual rate of 80 percent, with sales reaching nearly $150 million last year.

Although Kiva has proven to be a successful company, Amazon’s full-on purchase of the manufacturer is a bit mysterious. Kiva’s products are peripheral to Amazon’s existing business, and for $775 million, Amazon could have just bought a bunch of Kiva’s robots without having to bother with running the whole company.

Amazon has said that it will continue to sell Kiva robots to other companies and the retailer will likely also look into ways to tweak and tailor Kiva’s systems from the inside, giving it an advantage over its competition.

Considering Amazon’s track record with warehouse employee complaints, a shift to more mechanical labor seems like a smart move. Last year, Amazon took heat for turning up the heat on warehouse workers, as several reports surfaced stating that conditions in the company’s US-based fulfillment centers were brutal, particularly during summer heat waves. The Morning Call reported that “temperatures soar on hot summer days, production rates are difficult to achieve and the permanent jobs sought by many temporary workers hired by an outside agency are tough to get.”