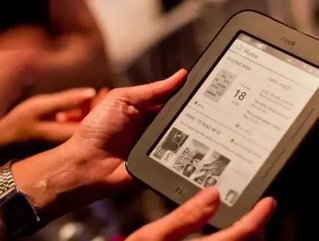 It seems as if there’s a new e-Reader on the block and it’s got quite the bells and whistles. Barnes & Noble unveiled its latest reader Tuesday morning that is the same size of a standard paperback book and has a battery life of two months – that’s right, two months. (The Kindle only has a battery life of less than a month.) Hopefully the new reader, named the Nook Simple Touch Reader, and its features will allow it to closely trail behind other tablets and readers released by Amazon and Apple.

Interesting enough, the announcement of the new Nook comes just days after John Malone of Liberty Media Corp offered to buy Barnes & Noble for $1 billion. Sources say the intent of Malone’s offer is so that he could take over the Nook brand and customers.

The Nook first set out to market back in 2009 and has since tried to reinvent itself to attract readers who are shying away from traditional print books and going into the digital age. The latest Nook, which weighs 7.5 ounces and has a 6-inch display, will retail for $139 and begin shipping on June 10. You can get your very own Nook Simple Touch Reader at Barnes & Noble, Best Buy, Walmart and Staples. The new device will also run on Android 2.1 and uses the E-Ink Pearl display.

Barnes & Noble will launch a new portal, myNook.com, in coming weeks that includes links to Twitter, Facebook, email, and others. The new device also comes equipped with its own social media platform, Nook Friends. The program lets you trade recommendations with friends to keep the social juices flowing.