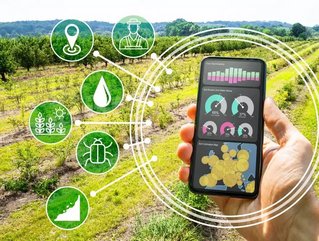 How technology - from connectivity to AI and analytics - could yield $500 billion to global gross domestic product from farming...

Agriculture looks poised for a digital transformation which could yield $500 billion to global gross domestic product by 2030, reports McKinsey & Company.

According to the consultation paper, farming remains the least digitised industry in the world – despite the global population - which will need feeding – expected to grow to 9.7 billion by 2050.

“Now much more sophisticated, digital tools are needed to deliver the next productivity leap,” highlights the report.

“Agriculture is in the early days of yet another revolution, at the heart of which lie data and connectivity. Artificial intelligence (AI), analytics, connected sensors, and other emerging technologies could further increase yields, improve the efficiency of water and other inputs and build sustainability and resilience across crop cultivation and animal husbandry.”

Over the next decade, existing technologies like fibre, low-power wide-area networks (LPWAN), Wi-Fi 6, low- to mid-band 5G, and short-range connections like radio-frequency identification (RFID) will expand their reach as networks are built out and adoption grows.

“If connectivity is implemented successfully in agriculture, the industry could tack on $500 billion in additional value to the global gross domestic product by 2030, according to our research. This would amount to a seven to nine percent improvement from its expected total and would alleviate much of the present pressure on farmers,” commented McKinsey.

By 2030, McKinsey & Company predict an advanced connectivity infrastructure will cover about 80% of the world’s rural areas (exception is Africa).

As connectivity increasingly takes hold, the report outlines that these tools will enable new capabilities in agriculture and pave the way for a digital transformation:

Low-power networks and cheaper sensors will set the stage for the IoT to scale up for; precision irrigation of field crops, monitoring of large herds of livestock and tracking the performance of remote buildings and large fleets of machinery.

Ultra low latency and improved stability of connections will foster confidence to run applications that demand absolute reliability and responsiveness, such as operating autonomous machinery and drones.

If LEO satellites attain their potential, they will enable even the most remote rural areas of the world to use extensive digitisation, which will enhance global farming productivity.

“Potential value initially will accrue to large farms that have more investing power and better incentives to digitise,” commented the McKinsey & Company report.

“Connectivity promises easier surveying of large tracts, and the fixed costs of developing IoT solutions are more easily offset in large production facilities than on small family farms. Connectivity enables more use cases in these sectors than in meat and dairy, because of the large average size of farms, relatively higher player consolidation, and better applicability of connected technologies, as IoT networks are especially adapted to static monitoring of many variables.”

Five use cases of connectivity

Connectivity offers a variety of ways to improve the observation and care of crops. Integrating weather data, irrigation, nutrient, and other systems could improve resource use and boost yields by more accurately identifying and predicting deficiencies.

Smart monitoring could also help farmers optimise the harvesting window which could help farmers maximise the revenue from their crops.

Preventing disease outbreaks and spotting animals in distress are critical in large-scale livestock management, where most animals are raised in close quarters on a regimen that ensures they move easily through a highly automated processing system. Chips and body sensors that measure temperature, pulse and blood pressure, could detect illnesses early, preventing herd infection and improving food quality.

Chips and sensors to monitor and measure levels of silos and warehouses could trigger automated reordering, reducing inventory costs for farmers, many of whom are already using such systems from companies like Blue Level Technologies.

The next generation of drones is starting to impact the sector, with the ability to survey crops and herds over vast areas quickly and efficiently. Drones also could use computer vision to analyse field conditions and deliver precise interventions like fertilisers and pesticides where crops most need them. Or they could plant seed in remote locations, lowering equipment and workforce costs. By reducing costs and improving yields, the use of drones could generate between $85 billion and $115 billion in value.

More precise GPS controls paired with computer vision and sensors could advance the deployment of smart and autonomous farm machinery. Farmers could operate a variety of equipment on their field simultaneously and without human intervention, freeing up time and other resources

“Still, much of this cannot happen until many rural areas get access to a high-speed broadband network. We envision three principal ways the necessary investment could take place to make this a reality:

“The success and sustainability of one of the planet’s oldest industries may well depend on this technology transformation, and those that embrace it at the outset may be best positioned to thrive in agriculture’s connectivity-driven future,” concludes the report.