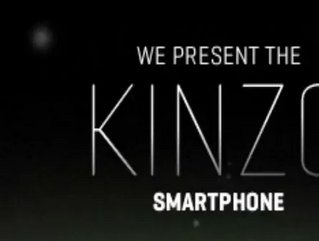 The American-Czech company Verzo released their Kinzo Android smartphone today. This is the company’s first foray into the dog-eat-dog mobile market, a tough crowd even for American companies. Verzo has listed the HTC Desire and Nexus One as competitors for the Kinzo, a bold move for a rookie company.  Smartphone users were first introduced to Verzo by teasing leaks from leading techblogs like Engadget who initially promised a September release.

Check out the commercial for the Verso Kinzo:

The smartphone is selling contract-free for $459 exclusively on the Verzo website. The company is including perks such as free shipping, refined packaging, and a set of bundled accessories such as a leather case, headphones, car charger, and car holder to entice new users.

The Kinzo smartphone is 12.3mm-thick and designed by Novague. It has a 4.3-inch WVGA glass-capacitive TFT display, a 1GHz TI OMAP 3630 processor, 512MB of RAM, a five megapixel AF camera (with LED flash), a VGA front-facing camera, tri-band UMTS support (AT&T-compatible), quad-band GSM support, WiFi b/g, Bluetooth 2.1+EDR and the standard sensors. The smartphone is powered by a 1590mAh battery, and a microSD slot provides storage (an 8GB card is included). No word yet on essential features such as a compass, HSPA, or support for the Android Market.

Additional features include an offline navigation software by Sygic and an app called TellME which connects users to the Verzo brand. Kinzo users will offer suggestions for improvements and vote for what modifications they want made. Modifications that receive the most votes will be incorporated into the next software update.

This unique approach is the most interesting thing about the Kinzo as it recognizes and caters to the consumer need for customization and choice.