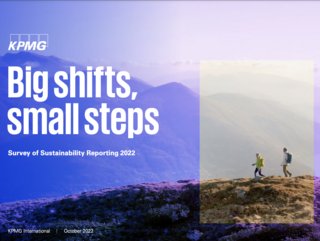 While carbon reduction target reporting has grown, less than half of the world’s largest firms are reporting on social and governance components, says KPMG

When it comes to ESG, the good news is that environmental reporting has grown steadily, and more companies are setting carbon reduction targets. The bad news is that reporting on the ‘S’ and ‘G’ in ESG is lagging.

That’s according to the latest findings from the KPMG Survey of Sustainability Reporting, which this year provides analysis of the sustainability and ESG reports from 5,800 companies across 58 countries.

This follows last year’s warning by the IPCC that the world was on ‘Code Red’ for human-driven global warming and comes as we head rapidly towards COP27, which takes place in Egypt next month. 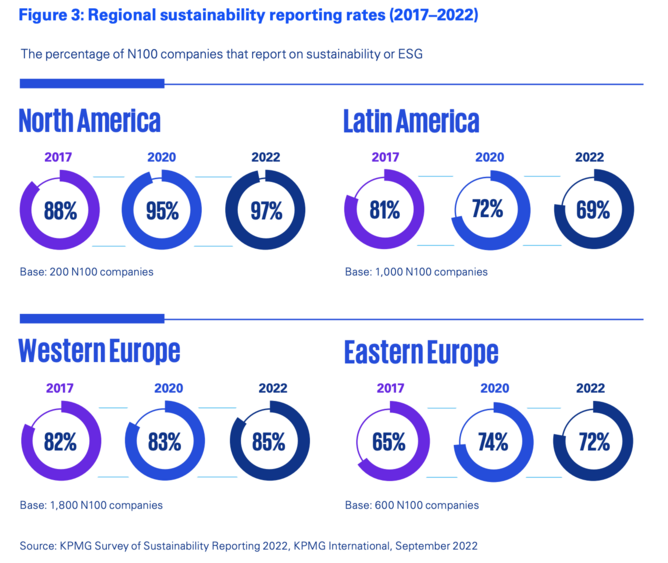 The report finds that the majority (97%) of the world’s top 250 companies, known as the G250, now report on sustainability and ESG matters, and that there has been a steady and consistent increase in reporting from so-called N100 (top 100 firms in each country) with 79% now reporting, compared to two-thirds 10 years ago.

The findings reveal that businesses are increasingly recognising the role they must play in helping to achieve climate targets with nearly three-quarters (71%) of the N100 and 80% of the G250 setting carbon reduction targets – and most recognising the need to reduce their own emissions rather than rely on carbon credits.

That’s not to say that more can’t be done, given that just 64% of G250 companies formally acknowledge that climate change is a risk to their business, and less than half currently recognise biodiversity loss as a risk.

But while sustainability reporting has improved, reporting on social and governance issues (the S and the G of ESG) is lagging – with less than half of the world’s largest companies provide reporting on ‘social’ components, such as modern slavery, DEI, community engagement, and labour issues.

Not just that, but less than half of companies have disclosed their governance risks – such as corruption, bribery and anti-corruption, anti-competitive behaviour or political contributions.

It’s not that organisations haven’t improved in these areas, they have; but that their ESG disclosures continue to be overwhelmingly narrative driven, rather than publishing quantitative or financial data regarding impacts.

In the wake of the pandemic and COP26, which shone a light on the growing inequalities in society, many organisations responded with proactive action that is worth applauding, says Jennifer Shulman, Global Lead ESG Advisory Hub, KPMG International. “We are seeing far greater action on gender equality, pay equity and community impact assessments.”

The real challenge facing the C-Suite now though is how they demonstrate and reflect on their company’s wider societal impact. “It’s time for organisatons to be transparent in their reporting to highlight what they’ve achieved and hold themselves to account on areas where further progress is required.”

KPMG predicts more progress over the coming year as organisations like the International Sustainability Standards Board (ISSB) roll out new global standards for reporting.

McCalla-Leacy believes that regulation is making a difference and is critical in providing guidance and direction to companies and help drive cultural change.

“Business leaders have accepted they have a responsibility and role to play in helping to slow and potentially avert the unfolding crisis. What’s needed more than ever is globally consistent standards from governments and a collective effort from the world’s major companies to report on all aspects of ESG, recognising the clear links between the environment and wider social equality issues.”