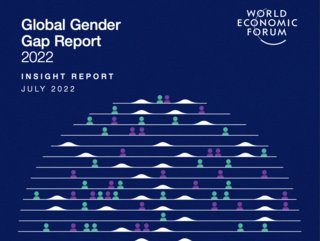 While women have been hired into leadership roles in increasing numbers since 2016, they remain severely under-represented, holding less than a third of leadership positions globally, according to insights from the World Economic Forum’s just-released Global Gender Gap Report 2022.

While the share of women in leadership has been increasing over time, women have not been hired at equal rates across industries, and globally there is a gender imbalance in leadership roles in almost every country and industry.

Only a few industries can lay claim to levels near gender parity in leadership, including non-governmental and membership organisations, education and personal services and wellbeing. The report finds that, on average, more women were hired into leadership in industries where women were already highly represented, and the same for men.

That said, relative to 2016, the industries showing the biggest improvement in their hiring rate for women into leadership are technology, energy, and supply chain and transportation.

“We predict that roughly one in four leadership roles at large global tech firms will be held by women in 2022, representing a rise of more than 4 percentage points since 2019,” the report found.

In the industry of supply chain and transportation, advances in women's leadership have also been made. According to a Gartner survey conducted in March, women now account for 19% of C-level positions in the average supply chain organisation, an increase of 15% on 2021.

While that’s great news for women in leadership, overall, there has been a 2% decrease in women working in supply chain generally – just 39%, down from 41% in 2021.

Women’s participation in the workforce overall does in fact paint a less rosy picture, with gender parity in the labour force at 62.9% globally – marking the lowest level registered since WEF’s Global Gender Gap Index began. 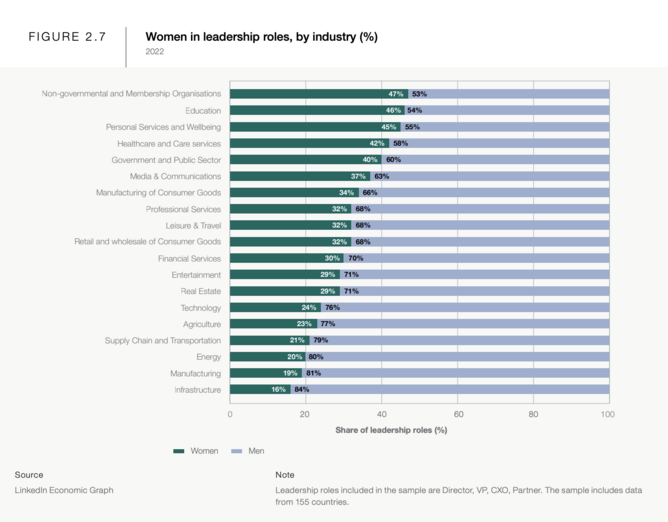 Why work is not working for women

According to WEF data. gender parity in labour force participation has been slowly declining since 2009, but was further exacerbated in 2020, thanks to the pandemic, with gender parity scores dropping.

Even in the US and Canada, where labour participation of women is one of the highest, the rate of labour-force participation has stalled – an impact of the pandemic and now the cost-of-living crisis.

According to the London School of Economics, 64 million women globally lost their jobs during the pandemic, with women’s jobs nearly two times more vulnerable than men’s.

The disproportionately negative labour market impact of the pandemic can be explained in large part by the continued disparities in care responsibilities that were exacerbated by the pandemic. Most care work fell on women as childcare facilities and schools were closed. Even before the pandemic, men’s share of time in unpaid work as a proportion spent in total work was 19%, while for women this was 55%.

“The cost-of-living crisis is impacting women disproportionately after the shock of labour market losses during the pandemic and the continued inadequacy of care infrastructure,” says Saadia Zahidi, Managing Director at WEF.

Female founders are starting their own businesses faster than men

That might be why more women than men are starting their own businesses, as they look to balance responsibilities.

High-frequency LinkedIn data for 22 countries shows that in recent years women have been establishing businesses at a slightly higher average rate than men, with the share of women founders doubling in the past five years, while the share of men founders has increased by 55%.

The trend has continued during and since the pandemic started and included a 43% jump in the founding rate for women between 2019 and 2020. According to WEF’s report, some portion of this number includes “necessity founders” emerging from the pandemic, with one of the reported drivers of self-employment during this period being job scarcity.

At the same time, evidence suggests that not all founding activity was driven by necessity. During the pandemic, the number of unicorn companies owned by women increased nearly five-fold, from 18 in 2020 to 83 in 2021. This represents 14% of the 595 companies that joined the Crunchbase Unicorn Board in 2021.