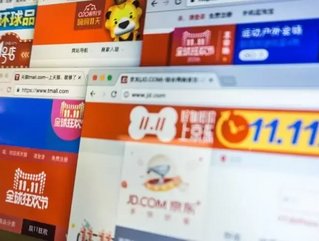 The Singles’ Day sale, which began at midnight Beijing time on Friday, reached a record-breaking 175,000 orders per second in the first hour and sold $1 billion in the first five minutes alone.

The company has hosted a Single’s Day sale on November 11 for the past seven years. Last year, total sales reached $14.4 billion but this year it’s estimated the company could sell as much as $20 billion worth of goods. That’s a 40% increase on 2015, according to New York-based research firm Fung Global Retail & Technology.

The sale is aimed at consumers in China and Asia with 100,000 brands on sale. 11,000 of those are from outside China, demonstrating a fantastic opportunity for retailers to reach this market.

A number of US brands are targetting Chinese customers through Alibaba and the top sellers this year include the iPhone 7, Beats headphones and Dyson products.

Another US addition to Alibaba’s Tmall is Smuckers. The brand began selling jam, peanut butter, nuts and coffee on the business-to-consumer site at the end of last year.

The 119-year-old brand is reaching Chinese customers with a push on homebaking - something that's gaining popularity among young Chinese families - but also through the publishing of meat and fish recipes with accompanying sauces using its products, a very different marketing style to the PB&J adverts seen in the US.

Alibaba is giving shoppers the chance to take 360-degree tours around foreign shops such as Macy’s, Costco and Target. This is done using either a VR headset or customers can buy a cheap cardboard frame that they can slot their smart phones into. Using a headset allows them to look around the store, virtually pick up items and even make purchases.

This is one of the new tactics designed to boost sales by giving customers a more immersive experience. Alibaba is one of the first to do this in a big way, putting it one step ahead of the big retailers it wants to keep in its eco-system.

Unlike most other shopping events, the Single’s Day sale begins with a live televised four-hour long, star-studded show to count down to the start of the sale. This year included stars such as basketball player Kobe Bryant and pop band One Direction.

This generates huge excitement over the sale, making it into an event for everyone – not just singles.