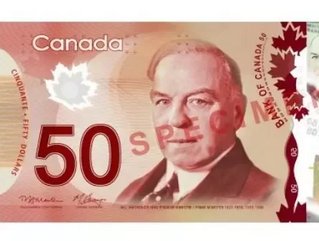 The Bank of Canada unveiled its new line of polymer bank notes yesterday. With its new designs and advanced security features, the new $100 and $50 bank notes will be issued in 2011 and 2012.

As these new notes will be used in the daily lives of Canadians, a lot of thought was put into the design.

“These bank notes evoke the country’s spirit of innovation, and their designs celebrate Canada’s achievements at home, around the world and in space,” said Minister Flaherty at the currency unveiling ceremony. “Bank notes are cultural touchstones that reflect and celebrate our Canadian experience.”

The design of the $100 note, to be issued in November 2011, focuses on Canadian innovation in the field of medicine. Sir Robert Borden, Prime Minister of Canada between 1911 and 1920 remains displayed on the front of the note.

The design of the $50 note, to be issued in March of 2012, displays the Canadian Coast Guard Ship Amundsen in the North to reflect Canada’s leading role in Arctic research. Featured on the front of the note is the updated portrait of William Lyon Mackenzie King, Prime Minister of Canada between 1921 and 1930 and 1935 to 1948.

Advanced security measures included on the note, such as two transparent areas—one containing complex holographic features, the other in the shape of a Maple Leaf—will make counterfeiting difficult.

“The Bank’s objective with every new series is to produce a bank note that Canadians can use with the highest confidence,” said Governor Mark Carney. "The Bank is combining innovative technologies from around the world with Canadian ingenuity to create a unique series of bank notes that is more secure, economic and better for the environment."

The remaining bank notes in the polymer series are expected to be  issued by the end of 2013, including the $20 note in 2012 with the design of the Canadian National Vimy Memorial and Portrait of HM Queen Elizabeth II. The $10 note will feature The Canadian Train with the Portrait of Sir John A. Macdonald and the $5 note will feature Canadarm2 and Dextre with the portrait of Sir Wilfrid Laurier.  These remaining designs will be officially unveiled at a later date.