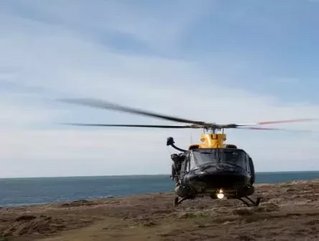 The pilot is a member of the 444 Combat Support Squadron, which fulfills a number of roles in the Air Force and provides rapid response to local emergencies, including Search and Rescue.  In a statement to CBC News Public Affairs Officer Captain Dave Bowen wrote “This trip was approved by the commanding officer of 444 Combat Support Squadron as an extraordinary measure to recognize the effort of the ground crews in completing essential maintenance and detailed inspection of one of the aircraft returning to Goose Bay from a deployment in Jamaica.”

Public opinion is certainly heating up surrounding the issue as Canadian military officials were recently under fire over the death of 14-year old, Burton Winters, who was found dead on the ice outside his hometown of Makkovik on Labrador's northern coast in January.  The DND blamed bad weather for their inability to launch a search and rescue effort while a private helicopter was able to land on the scene in the same conditions. The department has since launched a probe into that incident.

The photos posted on Facebook have prompted heated debate on whether the military deserves to be rewarded in such a manner or if government owned aircraft should be used strictly for missions.  Many in Labrador are still feeling the sting from Winters’ death, and are outraged to see that the DND would allow a copter to be taken out of rotation if a Search and Rescue incident should occur.  Others feel that it was a much needed day off from protecting the freedoms of our nation.

Whatever your opinion, I think we can all agree that posting the incident on a social media site has certainly added fuel to the fire.