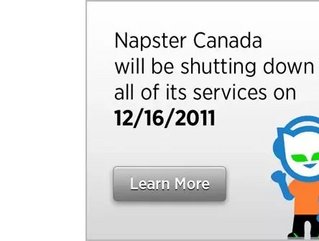 Napster has been operating in Canada for the past seven years, starting operations back in May 2004. In the wake of this announcement, Napster is advising its current customers to use their prepaid credits before December 16th or be prepared to lose them.

“Whether you are a subscriber or not, if you have purchased and retain any still-unused download credits, be sure to use your remaining download credits before December 16, 2011. After that date they will expire,” said Napster Canada to in an answer on its FAQ page.

Napster Canada is additionally recommending its customers to back up purchased music. Explaining that burning tracks to a CD is a hassle-free way to save music while not having to deal with DRM issues, Napster warns against backups made only on a users’ computer.

“[Using audio CDs] will allow you access to your music on any CD player and generally have a maintenance free permanent copy. If you do not back up your purchased Napster music downloads by burning them to CD and you later change or reinstall your computer's operating system, have a system failure or experience DRM corruption, then the downloads will stop playing and you will permanently lose access to them,” continued Napster Canada

With an announcement that is unexpected, it’s no wonder Napster hasn’t been on the forefront of the online music purchasing market in some time. As CDs have become a less used product with the wake of the MP3 and larger hard drive capacity, this closure announcement—although unfortunate for Napster Canada members—brings good news for one industry in Canada: CD manufacturers.