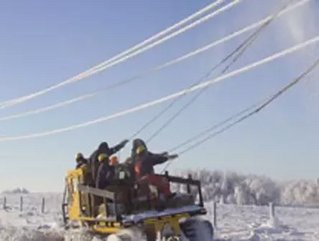 Manitoba Hydro announced today major power outages in southeast Manitoba due to the year’s first winter storm. Manitoba Hydro estimates that up to 6,000 customers are without power including residents in Beausejour, La Broquerie, Marchand, Ponte du Bois, Piney, Via, Hadashville, Whiteshell and its surrounding areas such as Falcon Lake and West Hawk.

6,000 customers are without power with 2,400 in Falcon Lake and 2,500 in Beausejour because of what Manitoba Hydro estimates is a downed tower.

Other issues for Manitoba Hydro are ice on the lines nearly eight centimetres thick and fallen trees knocking down lines and poles.

“The Selkirk Emergency Operations Centre (EOC) was activated late yesterday to coordinate all the work that needs to be done. Additional crews have been brought in from Brandon, the Interlake and Winnipeg to assist with the extensive restoration,” said Manitoba Hydro in an official statement.

Manitoba Hydro crews will be replacing at least 120 broken poles in the Piney area alone, while other crews will be rolling ice off lines in other parts of Manitoba. Electricity is expected to be restored slowly as electrical lines are hard to access due to snow and downed trees. Outages may continue through the long weekend, therefore, Manitoba Hydro is warning against travel as service trucks may be blocking roads in restoration efforts.